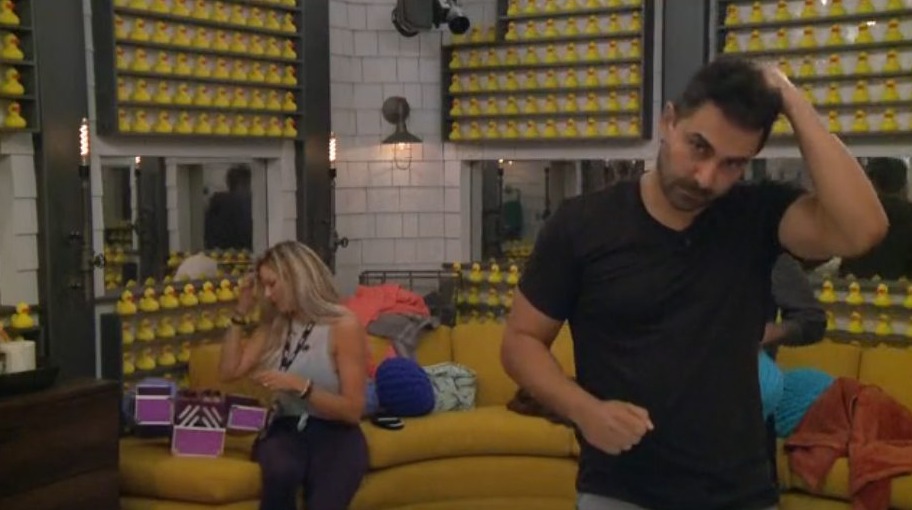 Today was the safety suite competition which brought the feeds down a few times today while they did the competition.  This appears to be no different than the other twists that gave a few people safety right before noms which makes it funny how Julie tried to pretend this was some new original twist. It’s not.

The competition was pretty huge because Cody has been having a tough time with nomination decisions as would be expected. Right now there is nothing to go on other than maybe the handful of people who have played the game multiple times.  There are two winners in the house, but one (FNicole) has been getting close with Cody as expected and Ian is just kind of there – just like his season.

So, there is a small growing divide in the house between the ‘old school’ and ‘new school’ players. Janelle, Danielle, Kaysar, Memphis, Enzo, Keesha, and Kevin are going to kind of flock together while the rest are considered ‘new’.  Well, two of those old school players are now safe this week because Kaysar won the competition which saved himself and he chose Janelle to be safe as well.

That’s a smart move, but I point it out because it’s so obvious that many wouldn’t have done it. There have been so many people to overthink their position in the house that they do something crazy like offer safety to the ‘other side’ of the house. Kaysar is no fool. He is aware of the differences so he’s going to lock down some allies right away and beat around the bush. Janelle is a strong player and it would have been stupid to save some random person like a Nicole or Christmas.

Anyway, that’s enough of the recap. Before I begin, thanks to you guys who have donated so far already. I’m humbled!

Note – I put a pop-up on the front page to opt-in to emails.  If you enter your email, you’ll be emailed whenever I publish a new post. If you see the pop-up more than once a week, or if you’ve already entered an email, please contact me.

Update: I added a page here if you missed the pop-up and don’t want to wait a week to get it back. Click here to visit the page to add your email addy

Now that I got to see her outfit, I’m off to bed. Catch you tomorrow