A Showmance Final 4; Bribes Before Allowed; What Is Going On? 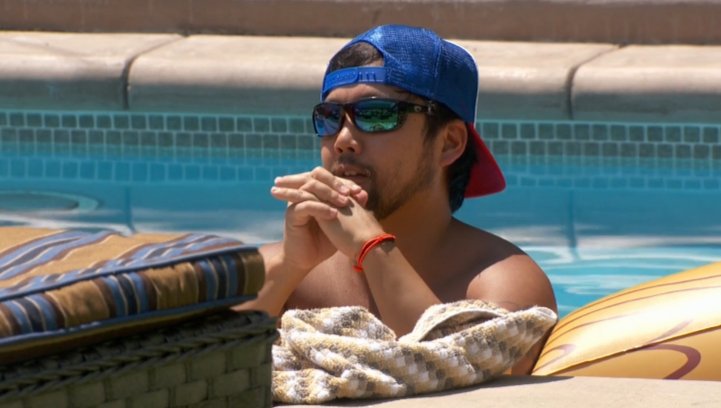 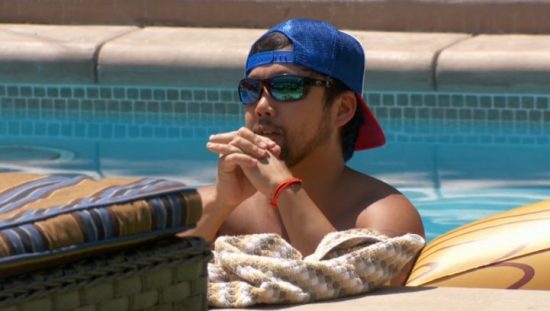 I’m back, everyone!  To be fair, I’ve been back for a few hours, but I had to stay up all night so I didn’t miss the flight, so I crashed as soon as I got home for a little while. Plus my kitty needed some QT with me, and you know what they say, cats before rats.  I’ll cover more of my vacation later, but with Brianna leaving for school and Pam stepping down, updates have been lacking, so I need to fill you guys in on things that have been going on.  Before I do that, I want to give those two a huge thank you for filling in while I was gone.  I know Pam was dealing with a lot of real life issues, and Brianna was getting ready to head back to college, but both took time out of their days to do their best to keep you guys updated.

Alright, to the house.

What the hell is going on? The other day I made a post talking about the decision to nominate Paul and Victor as pure strategy. It made sense because those two are far more difficult to beat if anyone wants to win the money. You go after the strong and get them out. I thought they just decided Nicole and Corey may be in a showmance, but Nicole is practically useless in competitions, so they’re still a lesser threat. Maybe they still feel that way, but now I hear shit about James and Nicole chatting about guaranteeing each member of their 4 person boremance $10k should they take each other to the final 4 and one of them wins. Seriously? That’s how the season is going to be remembered?  The season where Victor destroyed every competition, came back into the house, and be the only person with the guts to go after King Paulie (which also had the revenge storyline going). The season where….  wait, that was pretty much the highlight of the season. I guess they did set the bar pretty low.

Let me go into more detail on the bribe deal between James and Nicole. Now, James of course has been offering Natalie the world if he wins, but that’s because he’s an idiot. It wasn’t bribery as much as “I know you’re going to drop me faster than Meg did, so maybe I can win you over with some money” type of talk. However, what James and Nicole were talking all day about it and actually making deals to bring the boremances to the final 4 in exchange for a cash prize even if someone finishes 4th place. That’s extremely against the rules, as “superfans” like Nicole and James should know this shit. How did they react? Well, flashback to 8/22 @ 3:51am. Nicole comes out of the DR to head into the HoH and tells James they got in trouble and she has to say on camera she won’t get him something nice (then laughs)

She goes back to bed, and James is called into the DR for a lecture session of his own about breaking the rules. He comes back in and tells the group a little more, but not entirely the full truth. He made it sound like he was going to get the house gifts if he won. Even though it sounds less innocent – still a bribe.

Here is where it will get funny – The next care package is literally giving someone $5k in cash telling them to use to to bribe another person for an advantage in the house. Mind blowing. 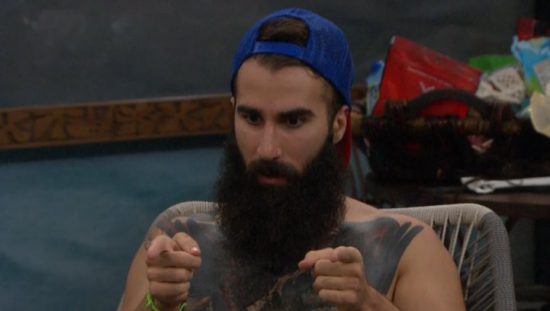 You mean to tell me that bribery is bad if the players decide to make handshake deals that they’re clearly willing to break (James, bounce checks, blah blah), but bribery is good if it’s officially endorsed by the production team. Get your shit together, Big Brother.

It doesn’t sound like there will be much of a punishment for the two, and because of the care package bribe, it will be damn hard to explain that to people on TV if it were to happen. This is just another wrinkle in a weird ass season that still has a 50%ish chance of douchebag Paulie re-entering the house!  (I say 50% because he’ll go against Victor.  Da’, Z, and Bridgette won’t win. Probably won’t even come close). It’s going to be Paulie versus Victor unless the challenge is 100% luck, or endurance.  If endurance, Z ups her odds a bit to around 10%, while Bridgette goes from 0 to 2%.

I’ll post a live update thread in a little bit, just wanted to catch you guys up on the house, tell you I’m back, and things are going to be back to normal around here. So stop freaking out in the comment section!  🙂