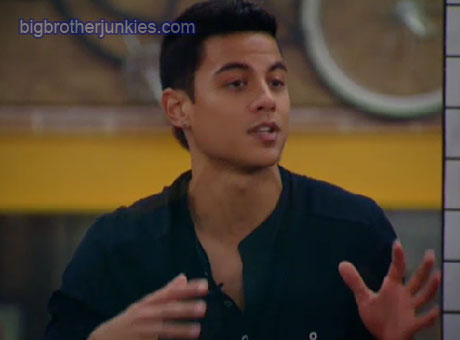 If you’re a fan of the drama, you take a really tense house, then shut off the back door for the day and see what happens.   That’s exactly the situation going on in the house right now as the Daniele / Dominic faction decided to take on the veterans, while the floaters did what they did best, sit back and watched.

Aside from “100%” being used about 7 times per minute, it is quite interesting to see all the chips come on the table.  Dominic is revealing how Shelly voted out Keith, Jeff is going off on Daniele for breaking their alliance, while also going off on Kalia for siding with Daniele in it.   I’m going to try and live blog it, though it’ll be tough since they’re all talking at once and doing it a mile a minute.

2:15 PM – Dom calls Porsche to speak, and she pretty much says a whole lot of nothing, in typical Porsche style.   Dominic is trying to figure out why the newbies couldn’t stay together.   Now Shelly is taking a piece from Porsche play book and talking a lot about nothing.. painful.   I want Jeff to go off again, at least he is entertaining.

2:18 PM – Shelly still talking, trying to explain why she went against her alliance in order to get further in the game.  Newsflash, staying with the newbies would have done the same thing.   I do like her spunk.. she says she’s going to do whatever she can to not be picked off.    I’m tired of her now though.

2:21 PM – And here is Jeff to Dominic “Are you trying to get a piece of mind? Who gives a fuck what happened on the first day?”  He’s so blunt, I respect him more and more.

2:32 PM – Daniele in the padded room with Dominic telling him he was stupid to blow up on Shelly because she said she was going to vote to keep him.   Dom may not have the fast track out of the house just yet

2:38 PM – Dominic jokes to Porsche in front of Brendon Rachel “I’m really jealous of you because you’re closer to Rachel and I want to be. I want Brendon out of the house so I can have her”  It’s amazing what he’s willing to joke/say to stay in the game.

2:40 PM – Shelly pulls a father Brady “When you point your finger at someone, multiple fingers are being pointed at you!”

2:42 PM – Daniele shows she still is intelligent, even if her game was blown up.  She realized early on she was the bottom of the Brendon/Rachel/Jeff/Jordan totem pole and had to make a move.

2:50 PM – The crew telling Shelly to try to talk to Porsche now. They really need her to flip if they have a chance in the game.  I wonder if Porsche will actually see that.. prob not.