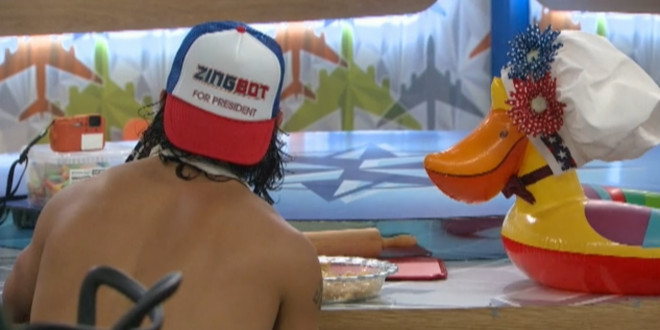 Good afternoon! First, I just want to talk about how hilarious Paul’s secret service punishment has been. When that red alert goes off, the live feeders are in for a treat! Last night for example, James hid under the mattress in the Tokyo room and kept asking production to call a red alert. Finally, his pleas resulted in one, and the other houseguests told Paul to go find James before he hid again. So Paul goes running into the London room, pats down the bed, and finds a melon with a hat on it and realizes that James made a decoy of himself. He and Natalie then started laughing hysterically. He found James without much of a challenge after that. But then, he goes back to the kitchen to pat down the others, and Paulie had stripped and was standing there naked (he covered the front at least) to try to make Paul uncomfortable when he patted him down. Flashback to 5:30 am to watch the whole thing. Absolutely hilarious.

After that, however, Natalie became violently ill from the Advil she was given in the DR for her neck pain. She was throwing up while James sat by her side and comforted her. As of a little bit ago, she was still feeling sick, so James was giving her a pep talk to not give up in the safari room. Other than that, most were just getting ready or cooking, while Victor played with his HOH camera and took pictures of Paul’s pelican among other things.

Also, I just want to thank everyone for being so welcoming to both myself and Pamela! Seeing your kind comments really helps us get through the long hours of blogging.. So thank you all for that!