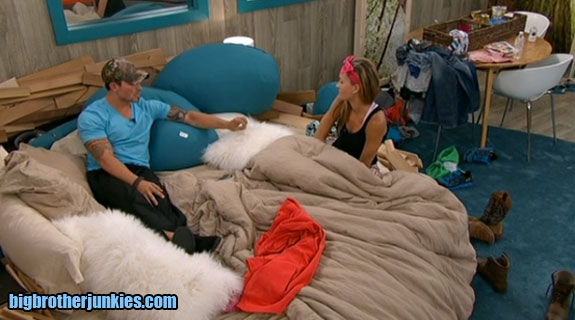 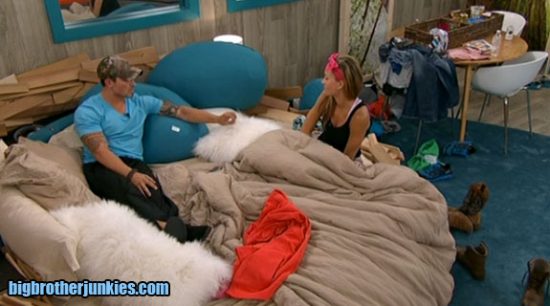 After spending much of the day talking about how great of a person he is and how everyone should feel bad for him because of it, Caleb decided to finally get up the courage to speak to Amber about their blossoming love (that she wasn’t aware of). Amber started blushing, giggling and acting so excited before ripping off her clothes and jumping into bed with Caleb for the night.  Oh wait, I mean she sat there so uncomfortably, you would think this was an episode of The Office.

Turn on the feeds and flashback to 2:05am to watch this brief encounter in all it’s glory because no amount of words can truly justify how awkward it was.

Needless to say, Amber didn’t take the news as Caleb would have expected, and when it was over, she went downstairs to re-tell the story to Jacosta and Victoria (FB 2.58am).  I think this sums it up… 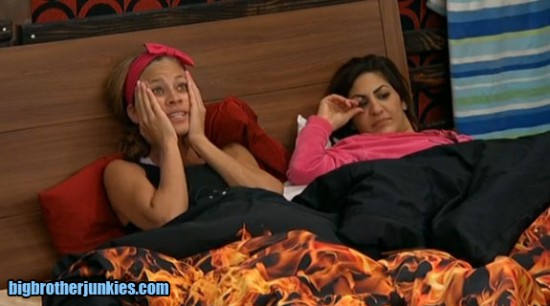 I suppose Caleb can forget about the idea of getting a ‘Camber’ tattoo. She told the girls she’s really not interested him in that way, and now it’s going to be even more uncomfortable when she sees him in the house. Prior to this exchange, she heard rumors about his crush, so she’d try to avoid being around him as much as possible. Well, Caleb took her leaving the room every time he entered as simply hiding her feelings so nobody else would know how madly in love with him she is. With the way I expect Amber to avoid Caleb now, he’s probably going to think she’s ready to marry him after the show.

And to elaborate more on what I said in the initial paragraph. Caleb really did spend the day talking to anyone who would listen about what great of a guy he is.  First,  he gave this long speech to Nicole about how often misunderstood he is, and then had to re-tell the story to Zach Attack and Frankie in the HoH room. The feeds basically spent about an hour on him just talking about himself… really.  Turn on the feeds to around 1:30pm yesterday for that fun stuff.

If you don’t have the feeds, you can get them here and use the flashback feature.