Travis
Evicted
Home / Big Brother: Over The Top / Feed Updates / Are The Ballsmashers In Trouble? BBOTT 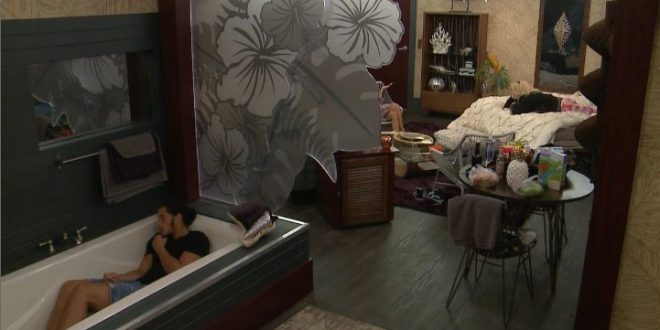 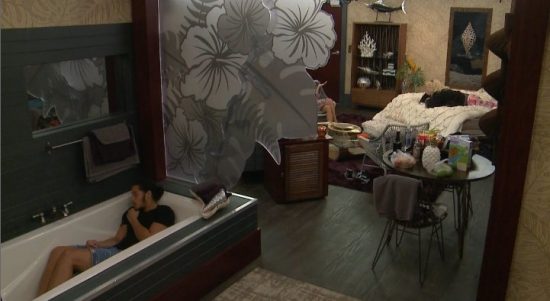 When Kryssie won HoH this week, it was pretty obvious that the four girls had their work cut out for them this week. With America still basically on the side of Jason, they pretty much need a miracle if all want to survive the week.

Another problem is that there may be some cracks forming in what has been an extremely rock solid alliance. Last night, Shelby was talking to Kryssie in the HoH room, while Kryssie let Justin hide in the tub and listen in. Shelby learned of Jason and Scott having some sort of thing on the side, and also found out about Justin snooping.  She called him on it, and he tried to play dumb, but she reminded him that he heard the conversation. I think that’s when it hit Shelby that there is more to Justin than he lets on, and more to the house than she realizes.  After a long night of thinking, she is starting to wonder if Justin, Jason, Scott and Alex have an alliance going. If that thought builds traction, it could destroy the ballsmashers and split everyone up.

Shelby did approach Alex about an alliance with them, and she denied it, but after being a HN for a week, I think the lack of a proper diet and good sleep is starting to make her more paranoid than usual.

As far as the group coming out of the week unscathed, it would pretty much take a miracle, and a sacrifice from Scott.  Kryssie is targeting Alex, but all early indicators are that Alex will receive the care package today, which gives her safety (we’ll find out in a few hours for sure). If this happens, it will then take America to nominate someone like Neeley which removes a vote from that side. It would still probably end up being a couch of say 2 smashers and Neeley, so that means the lone smasher other than Alex would need to win the PoV and save one. This essentially guarantees Scott go on the block, and the chances of Scott or Neeley going home over Morgan, Whit, or Shelby is fairly high. Especially after Scott is the one who split up Dani and Shane.

Still a long shot and the odds are high that one of the ballsmashers will go home, but we’ve seen during Alex’s week that sometimes the HoH doesn’t have complete control this season.

Vote for your Week 4 favorite here