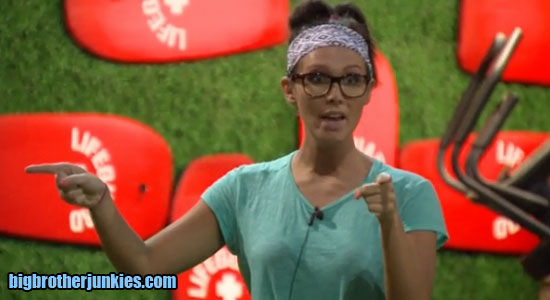 Audrey Is Likely Going To Play Herself Out Of The Game 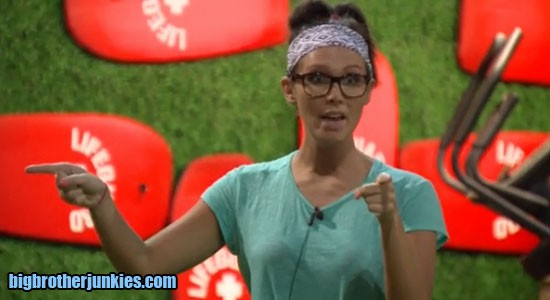 I need to make this recap brief because I woke up late (stupid late night feeds), and have an appt to go to an in a hour.  Don’t worry, you’ll get all the gossip when I get home and can settle in, but for now I’m going to recap as succinctly as possible (haha, I am horrible at that)

Jace became the re-nom yesterday, and was pissed. He fumed around the house all day, but finally started calming down until Audrey decided it was time to poke the bear. Instead of having a quiet week, Audrey just had to get to the bottom of rumors she was hearing about Jace trying to target her (he’s leaving the house, stop worrying). This sets off a pretty heated exchange between the two with her essentially pointing fingers at Clay (I’m sure that won’t come back to bite her).

Things cool for a bit, but as boredom hits, people talk. That talk naturally turns to the biggest drama queen in the game so far – Audrey. You see, she has been going around the house confronting nearly everyone whenever she hears a rumor floating about her (It’s BB, rumors happen). She has threatened numerous house meetings, and keeps trying to deflect everything from her. Well, in her ramblings, she doesn’t realize she is also letting other things slip, like the lyrics to some song James made up about Jace (yes, petty crap).

However, around midnight, many of the houseguests were chatting and putting all the pieces together – Audrey is a big problem in the game. She is the one spreading a lot of crap, and needs to go asap  (not good from a bloggers PoV).

I also want to mention that Audrey made herself two more alliances last night.  One with Clay and Shelli, another with the same three but including Austin and Vanessa. Seriously, these alliances are getting more and more out of control every damn season.

Anyway, that’s about it for now.  I’m going to start a live feed thread in about 2 hours when I return. I’ll try to go over any missing details from there.