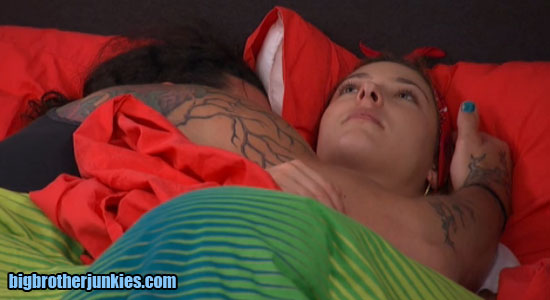 Around 10:45pm (use flashback feature here), Austin decided he was in too good of a position with the extremely strong 5 (soon to be 6) person alliance that was easily going to make it to the final weeks of the game. He pulls Jason aside and reveals the twin twist to him. Now, keep in mind, everyone already knew about the twist – minus Jackie who was still in denial. However, Austin’s motive was pretty much batshit crazy… and I mean Caleb-level crazy.

His goal is for someone to ‘take care of’ Julia so he doesn’t have to. This is mainly because in the event the three of them actually make the final 3, Liz would be guaranteed to take Julia over him. Yes, with 13 people and another 60ish days remaining, Austin is trying to eliminate a potential situation that could arise during the final week of the season. You read that right.

Of course Jason ran and told Meg and it eventually got to Shelli, Clay and Vanessa.  As the three of them (Clay, Shelli, Van) sit around the HoH room at 2:45am, Shelli explains it like this. Austin knows that Liz or Julia will be a target once they’re both in the house. His goal is to make a deal with Jason for 1 week of safety to guarantee he at least make it to jury with Liz, should they both get evicted.

During the second week of the season, I called Austin the best player in the house. I take that back and then some. I understand emotions get involved and it sometimes messes games up. Look at McCrae with Amanda. However, Austin is acting like a school kid with his crush on Liz and it is literally costing him a legitimate shot at winning the entire game.

Needless to say, his alliance was not very happy about the situation, and Austin just went from a near secure final 5 spot to potentially not even making jury.

Typically, Thursday afternoons are quiet in the Big Brother house, but this event last night could potentially lead to some issues this afternoon. If not today, than most definitely tonight after the HoH competition and we see who gets power. I’ll be creating a live update thread later on to monitor the situation, but I’m not guaranteeing any action this afternoon. Either way, stay tuned.