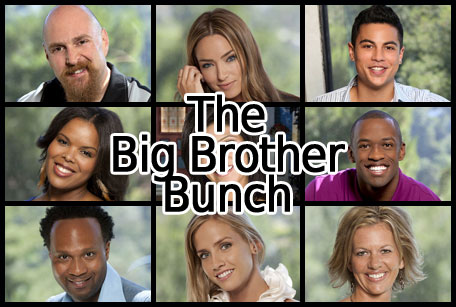 CBS started playing commercials for Big Brother (which starts in less than a week!), and this time they feature the new cast acting all crazy jumping around and doing weird poses.   It also drops a clue about the remaining 6 houseguests, but we all know what that is right now.   There is even a poll on the cbs site to vote for who you’d like to see return to the house, but it’s a fluff poll considering the cast has likely already been picked.   Anyway, if you care, here are the current poll results:


Based on those results, I’m expecting Jessie and Natalie to definitely walk through the door, and my other guesses are Brendon and Rachel, and a toss up between Jeff/Jordan and Will/Boogie.

Don’t rush to the site to vote though, like I said, the poll is irrelevant.  Instead, take advantage of the last few days of the discount season pass for live feeds!

Anyway, here is the commercial:

I blog stuff about Big Brother
Previous More On The Mystery Six
Next Game On!
Subscribe
Login
0 Comments
Inline Feedbacks
View all comments