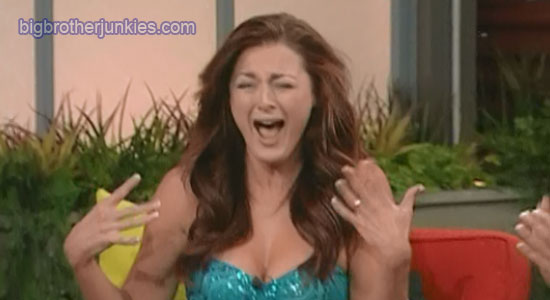 Another season of Big Brother is officially in the books, and one person is $500k (minus taxes) richer tonight, another is $50k (2nd place), and a third is $25k (America’s Favorite). Before we get to that, I’m going to talk about the episode a bit.

We got to finally see the second part of the competition between Adam and Porsche, where both players had to dive in a tub and put faces through a maze based on where they won the Head of Household.  Porsche did decent, but Adam decided using goggles for the competition was for suckas so he tossed his aside like a man who sucks at competitions would do.  Of course, after one more dive in, he realized.. “Shit, I need goggles to help me see better under water” and got out of the pool to put them back on.

He clearly felt had he won that competition, he would have won the 3rd round (he probably would have), and then cruised to victory in the final 2.  So the rest of his life, he’s going to feel throwing goggles was basically throwing $500k away, but don’t worry Adam, it wasn’t.  I have a hard time believing you would have had a better shot than Porsche in the final round.  I’m sure he feels he locked up Jeff’s vote, but I don’t agree.   Either way, we’ll never know.

Rachel stuck with her word and kept Porsche in the final 2, and it was then time to talk to the jury and try to win their votes.   Like I expected, Rachel pushed the whole ‘I’ve been a target the entire game‘ line, while Porsche didn’t mention that she, too, was nominated 4 times.  Granted she was only up for eviction twice,  and instead just downplayed the golden key.  I know Porsche wasn’t about to throw the person who just handed her at least $50k under the bus, but she could have mentioned how neither of them were really a target until roughly a month in when the veterans stopped winning HoH’s.  In fact, Daniele’s major plan was to get Jeff out, and Rachel made herself a target by being mean to people early in the season.  Like Daniele said, Rachel should feel lucky it wasn’t a personality contest.

Porsche had a much better plea to the jury than she did answering the questions, but Rachel really drilled it in everyone’s head that she was alone in the world and had an uphill climb the entire game.  I’m not trying to downplay what she went through, but having a real life partner in the house as someone you can trust completely gives you an advantage none of the newbies had.

To her credit though, Rachel won when she needed to, and when the newbies were in completely control of the game, it was our fiery red head that stepped up when they needed it most.   Both Rachel and Porsche certainly fought their way to be in the final 2, and I was happy both were there.

On to the voting.. as I predicted, it would be a 4-3 vote, and I got the winner correct, but I was wrong on who Shelly and Adam would vote for.  Meh, can’t win them all.  Anyway, here were the final votes to win:

I also predicted who would win America’s Vote and $25k.. that would be Jeff.  Congrats Jeff on all the money you earned this season!

That’s all for now!  I will likely be posting updates here and there through the winter if anything happens, but it’s been an amazing summer and want to thank each and every one of you for reading every day and giving me your feedback.  I can’t get enough, positive or negative!  Let’s hear it.

Again, congrats to Rachel, and thanks for following me this summer!