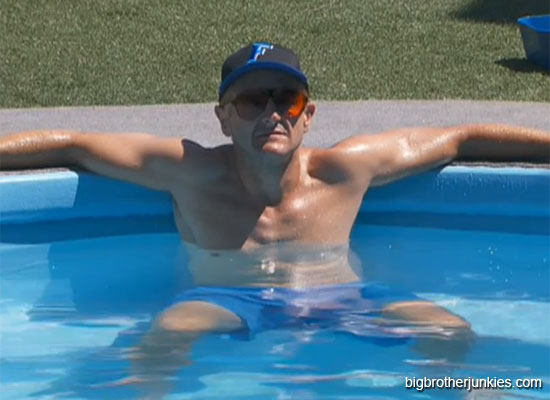 Big Brother 14 – Boogie Is Confident, But Should He Be?

After the complete meltdown on Friday night, things have since calmed down a bit in the Big Brother 14 house.  Sure, it’s still far more entertaining than any day last week, but it doesn’t top Friday night.  To be fair, the Friday Fireworks will go down in BB history as one of the more entertaining post-nomination feeds in a long time.

Before I get into Sunday observations, I want to just tell you a few ways to follow me:

I know a lot of people will be finding this page by searching for Big Brother 14 information tonight, so I wanted to let you know some good ways to get Big Brother 14 spoilers, updates and more.  In addition to following me, you can watch along on the live feeds by clicking here and signing up for 3 free days.

I apologize for being a bit vague early in my post, if you’re just tuning in for the first time since Thursday night and want spoilers, here is what happened…

Shane won the HoH competition after Boogie went for (and won) the $10k prize while a few others instantly went for safety (Britney won safety).  Boogie was very confident with his Silent Six alliance that he chose the money because being nominated was the last thing on his mind.  He’s been in the world of Big Brother long enough to know better, so when he became upset at being nominated alongside Frank, it shouldn’t have been as much of a shock.  Look at Dan, it’s not his first rodeo and he’s been expecting to be nominated every chance someone has.

Needless to say, after nominations it was very chaotic and things were not helped when Frank and Boogie cornered Shane which resulted in him throwing his former coach Britney under the bus.  This successfully deflected the anger towards her and the three became civil once again.  However, when Britney found out Shane threw her name out there, she freaked out and had a very rough night venting to anyone who would talk to her.  During her frustrations, she managed to throw Dan under the bus by saying HE was the mastermind of it all and she apparently had no control over Shane (yea right).

Fast forward a day, things settled down a bit yesterday, but became very tense when feeds returned after the veto competition.  Frank had pulled out a win in which Joe claims he cheated during the game (not during the draw which was just speculation by a careless Big Brother updater). There is no word yet on this alleged cheat scandal, but needless to say Boogie and Frank were not happy to hear Joe went to the DR to complain about it.

Cheating scandal aside, it’s very clear that Frank is taking himself off and the pair are working to get Dan as a replacement nominee.  Very convinced that it’s happening, Boogie is already planning on how he’s going to handle Dan walking out the door, but as of 3:00pm bbt, Jenn will be the replacement nominee as a pawn, not Dan.  Sure, anything can happen in the Big Brother house, but as a personal opinion I don’t think anything will.  Shane will likely stick with his alliance and nominate Jenn, and they’ll all work to get votes against Boogie.

Sadly, Frank may end up winning HoH on Thursday, but once his shield is gone, there is nobody left in the house that is willing to work with him now.  Frank may end up being out of the house as early as this Thursday as the second eviction, or as late as next Thursday.   I say sadly because whether you like him or not, he’s a great competitor and has had to deal with quite the roller coaster of emotions this season so far.  It will be 48 days before Frank will finally be able to cast his first vote in the house, which is quite the impressive feat.

I will have company over tonight so I won’t be able to live tweet the episode, but you can discuss the show with people on my facebook fan page.

Update – Crank up the feeds.  I guess Frank and Boogie are waiting for Joe to come outside so they can pick an argument with him.  Feeds may blow up tonight.