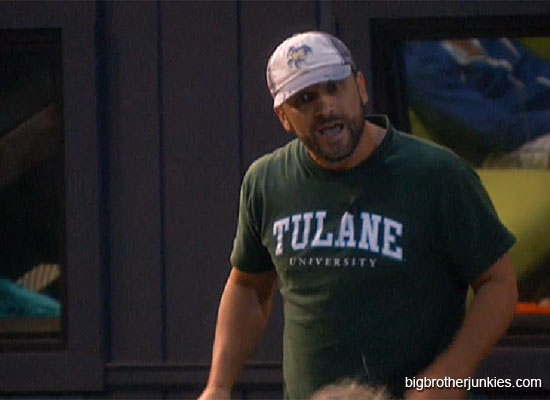 So, remember the post I made about Wil crying over something Willie allegedly said?  It turns out, while I was all snug in my bed, Willie was dealing with it the only way a Hantz knows how, by yelling at people.

To see this drama in action, crank up the live feeds and flashback to 10:25pm bbt (note, I think you need to convert it to your time zone), and watch Russell, errr, sorry, Willie start screaming at the “straight talking mother f*cker, Frank”.   This basically started because Frank accused Willie of doing some shady stuff in the house, like trying to split the votes so Willie can come and break the tie, appearing as the hero to Frank.

While this sends Willie into a complete uproar, he does a fantastic job at dodging that issue while bringing up the gay slur part. What happened with that is, earlier in the day Willie mocked Wil for taking a 24 hour break and in the process used a higher pitched voice to imitate him. I think it was completely overblown on Frank’s part, and you can see the “mocking” in question by doing a flashback to 2:20pm bbt. It was no different than a person using a deeper voice to try and talk like Barry White, or a nasally voice to talk like Roseanne. Fact is, Wil has a higher pitched voice than the rest of the house, including a few women.

Based on the way Willie reacted, it was clear he tried too hard to overplay the game this week and was caught up in it.  Was Frank right to call him on it?  Probably not 2 days prior to the vote, but maybe after he was still in the house on Thursday.   I always felt Willie was foolish for trying to keep Frank in the house this entire week, and I’m not sure why he kept fighting to potentially make it happen.   I’m also not sure where the house stands with Willie today after he was clearly trying to be king of the BB house throughout the day yesterday.   If his little alliance is still with him (JoJo and Shane), Kara may have earned herself a few votes, but Frank has managed quite a few on his own.

The way it looks right now:

The only way Kara stays in the house right now is if JoJo and Shane are still with Willie, Danielle votes to keep her friend, and Ashley becomes the deciding major swing vote.

Still plenty of time to see how things unfold, but Ashley may be holding quite a bit of power this week and I’m not even sure she realizes it yet.

Watch along with the live feeds today here: