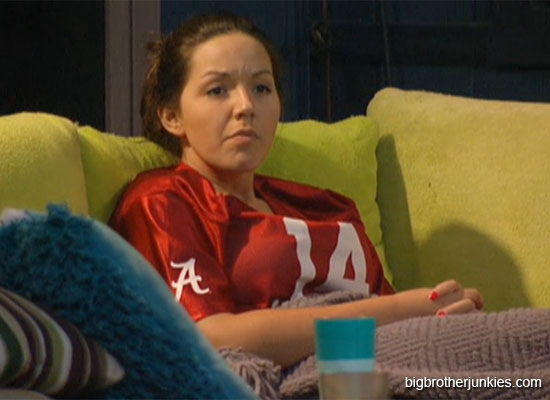 First off, I wrote a thread earlier talking about my memories this summer and the support in the comments section was completely unexpected and overwhelming.  I wanted to take a minute to thank everyone for their kind words. Blogging becomes really enjoyable the more people read it and interact with me, and it feels like I’m watching the live feeds with hundreds of my friends.   That leads me to this, despite the commercials for next year, Big Brother 15 wasn’t officially announced until today.  This means I will be back blogging away next year, so bookmark this site, follow me on twitter or facebook and get any updates throughout the winter.

Ok, now to the moment we’ve all been waiting for.  The live show!   In just 30 minutes from now (as I type this paragraph), Big Brother will begin and we’ll get to see the rest of the endurance competition  (Dan won), the second challenge (Ian won), and the live final challenge between Ian and Dan.  The winner of that challenge will determine who sits next to him in the finals.

Then, we’ll hopefully get to hear the jury ask some real tough questions (unlike the pathetic jury from Survivor last season that I still grumble over), watch Dan make a speech that will try to win people over despite stabbing almost every one of them in the back, and either Ian or Danielle flutter for words  (Yes, I’m pretty confident Dan will be f2).  Finally, we’ll see who wins $500k, and also who wins America’s Choice and then that will be it for the summer.  Sad times…

Well, that’s it for the summer.  I’m not sure how I feel about the outcome at the end.  Ian certainly deserved to win against anyone else, but Dan outplayed half the house and lost 6-1.  Reality show juries vote with their hearts instead of brains these days.

The Winner of Big Brother 14 is:

Here are the votes:

10:27pm est – The jury asked a bunch of decent questions.  For some reason they kept crediting Ian with creating the quack pack, but Dan jumped in to squash that.  In addition, Danielle asked Ian about his F2 deal with Dan, but Dan admitted he would have taken Danielle. It’s clear Ian is trying to play the nice guy role, while Dan is owning up to his behavior.

10:12pm est – Ian chooses Dan to try and beat the best in the finals.  Could work against him.

9:52pm est – This is only the first part of Danielle bullying the crap out of Ian all week.  He had a rough week.

9:37pm est – So Ian threw the competition as well?  How does Dan not win it all?

9:30pm est – Here we go, it’s on finally.  Note, I am pretty sure all the former houseguests are there, except for Willie.  He “couldn’t make it”

9:00pm est – Still waiting for the episode to begin

I am going to bump my predictions down with my live blogging because I don’t want people confusing them with the actual results, but how accurate do you think they are?