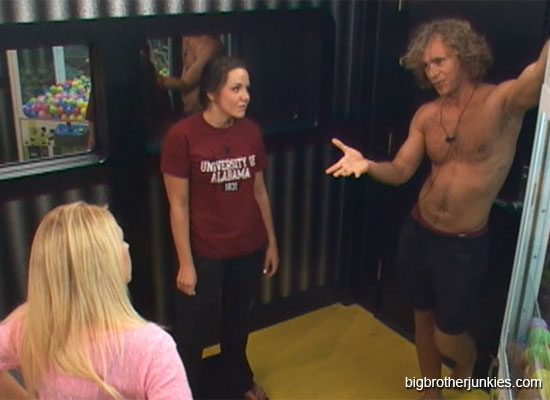 It was probably the most exciting night in the Big Brother 14 house since Willie was around. What started off as a simple nomination of two strong players turned into complete chaos and mayhem as those strong players revealed why they were such a big threat in the game.  All they did was sniff out some weaknesses in “The Quack Pack” and exploited them all night long.  This resulted in an alliance shattering and turning on itself rather than sticking together as a tight unit that has the numbers to get whoever they want out of the house.

It’s kind of sad when you watch the feeds.  It certainly makes me wish I was inside the house against that cast.  All you have to do is look in their direction and it’ll send them running and worrying.  Dan is the only one from the group who doesn’t feed into the intimidation, but everyone else?  Forget it.  Easy as pie… if Boogie picked Willie and Frank, those three would have easily dominated the house from day 1.   IMO, the coaching twist completely screwed up what was actually a pretty decent cast of players…. at least compared to BB13.

At this point I’m not really sure what side I’m rooting for.  I see a lot of people against Boogie and Frank, but I’m kind of hoping they pull off a miracle and change things.  I root for entertaining things in the house, and Frank and Boogie make it that way.  In addition, I like Boogie’s style, he’s direct and blunt.  I gained a lot of respect in him for his move on Janelle, and though he handled it like a douche, it was still a power move.  Picking a winner out of the rest of the house would be incredibly tough to do, even Shane.  While he’s dominated competitions, I’m not impressed with his social game very much, unless his act is all planned.  Dan on the other hand has had a solid social game, but throwing every competition so far except maybe the latest one is weak.

The reason I think Frank and Boogie’s social game is probably the best so far is simply how they have adapted to their competition.  You can watch it the way they spoke with Shane at 7:08pm bbt (flashback here), and then completely changed their style for Britney at 7:55pm.  They see Shane is pretty weak socially, so they coddle him and make him feel like it’s not his fault.  Then when Britney enters the room, they break her down until she snaps and then start coddling her and working with her.   It’s quite impressive, almost like watching a police interrogation video where they not only control the tone, but they know their opponents.  That’s not an easy thing to do, and it’s worth mentioning.

On the flip side of that coin, you have Shane who has somehow managed to get a ton of blood on his hands, has controlled his fatal attraction with Danielle but is still likable and not a target by anyone.  That’s impressive in it’s own right, but I’m just not sure if he lucked into it with his “Golly Gee” personality or it was planned.  If planned, he deserves his own kudos.

Either way, it’s rather impressive to see some of these people work, whether you’re a fan of them or not.

The POV is today and it’s going to be crucial for Boogie or Frank to win if they want any chance to make it near the end.  Regardless of who wins, you can expect them to be hounded by Boogie and Frank until Monday, and I wouldn’t be shocked if that person cracked under pressure in those 48 hours.