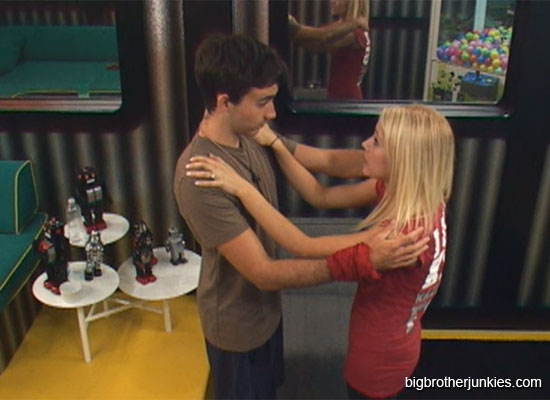 Will Britney pull it off?

Disclaimer: I wrote up most of this post prior to actually finding out the HoH winner. This is why I put a random image of Britney and Ian up there (I suspect either Frank or Britney wins, so I’m playing odds). I am heading out for the day tomorrow so I need to get a jumpstart on this post because I will have to post it then fall asleep.

What a wild night, absolutely wild.  One of the best live shows I’ve seen on Big Brother yet.  You had the drama, the suspense and the upset victory which of course comes with plenty of conspiracy theories.  “Frank was given more cloves, everyone else had one, etc, etc”  My opinion on that “stuff your conspiracy theories in a sack”, even if they are rigging the show (which I don’t think they are), it made for one hell of an entertaining episode.

Do you think I’d be staying up till whenever it takes to find out who wins the next HoH if “The Quack Pack” was in complete control?  No, that’s about as boring as a Wil-Joe nomination.  Frank being in the house is the best thing for the show because it keeps it entertaining and keeps people coming back for more.   If he didn’t win that PoV, I can tell you what would of happened tonight.  Frank would have gone home, Brit would have won the HoH (because they’re throwing it to her for some reason), Ashley gets nominated with either Jenn or Joe and nobody cares. Snooze fest, wake me up on Thursday.

Sure, maybe Frank has “bully” tendencies, if you ignore the fact that many reading wouldn’t like being the #1 target in the house since day 1. He is the only player who hasn’t been able to sit down and relax for an entire week all season, and you wonder why he treats everyone else poorly?  Jenn is coasting through the game not saying a word.  Joe is cooking his way through. Danielle is crying her way through.   I don’t mean to get on a soapbox here, but cut the guy some slack.  He’s been the hardest player I’ve seen in a few seasons now.  I don’t want him to win it all any more than I want Shane or Dan to win… all 3 have played a great game and would be deserving of the title.  I simply want entertainment and a final 2 that doesn’t consist of like Joe versus Jenn. That would kill a pretty decent season for me.

This should make for an interesting week on the feeds and could completely change the rest of the season.    Like I said, I’ll be traveling tomorrow but be sure to sign up for the feeds to watch this action unfold!