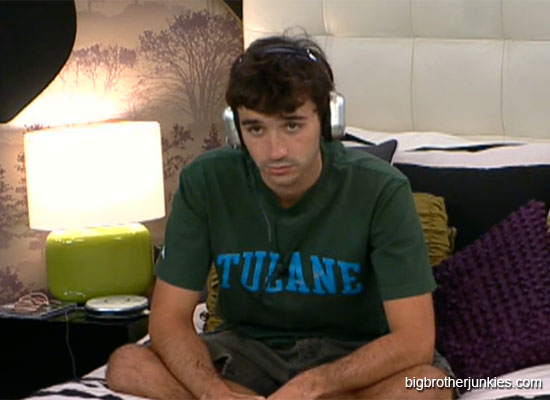 I wasn’t going to write any more posts about Big Brother 14, but I find myself sitting here a day later with plenty to say about the season that had me busy all summer long.   First, I want to give Ian a huge congratulations, despite my tweets where I felt Dan deserved the prize, there is absolutely no doubt that Ian deserved it as well.  This isn’t like choosing between a badass player and a floater.  The best two players in the house were seated in the final 2 chairs, and the best man really did win.  This is what reality TV should be about, and I also wanted to give credit to Ian for taking Dan despite all the threats and harassment by Danielle all week.   He chose the harder road by facing the master manipulator, and came out on top.

When I say he failed his initial goal, it was pretty evident early on that Ian’s intentions this season was to make a mark someway or another.   He labeled himself as a ‘villain’ while playing pool, and this was because he was doing what is done a billion times every reality show, he was playing multiple alliances.   It appeared he was just there for the experience and was already auditioning for a call back in a future season. At the final 4, he announced he was now able to coach a future houseguest (because Britney made final 4), but seriously who thinks of that?  He then accepted his defeat while sitting next to Dan before a miracle was performed and Shane was voted out of the house.

That said, Ian didn’t win because he was the ‘villain’, in fact he won because of the opposite. Dan was the villain, and Ian was not.  Ian appeared to be the kid with the big heart who’s lifelong goal was to step foot inside the Big Brother house, and his passion of the game probably saved his season a few times. Boogie saved him very early in the season, Dan and Britney took a pounding to keep his secret alliance away from Boogie/Frank, and then the big blindside on Shane at the end of the season.  Why did they save him?  Because he is a nice kid, played smart and aligned with the right people  (“The Quack Pack”) instead of the stronger, but bigger targets in Frank and Boogie.  Choosing the correct alliance is a skill in itself, and quietly jumping from a sinking ship is not to be ignored.

Boogie was right, Shane/Danielle/Dan/Britney was a very solid alliance, and that’s why he tried to get involved in it.  While Boogie managed to use them for a week, he completely screwed himself by already thinking of turning on his alliance a week later.  Ian, on the other hand, appeared to be a much more loyal soldier for them and that allowed him to go very far in the game.

In the end, while Dan was the master at controlling every aspect of the game, his big failure was not knowing his market (or in this case – jury).  He even joked about it in the diary room about how he can sell ice to an Eskimo.. That’s exactly what he did, and that’s why he lost the game.  While Dan was selling ice to people who don’t need it (and then making them hate him), Ian was playing the smart route and setting up shop in Arizona making a killing selling ice.   Dan may win bragging rights on who is the bigger con artist, but Ian will be in his ice sculptured mansion rolling in profits.

The trend with reality shows continues, and probably will for many years.  Get out the strong people first, promise the world to the weak, use them to get to the finals and then wonder why those upset weak people no longer support you.  Strong competitors respect that style of play, but they’re usually sitting on their couch from home watching the season play out.   Dan played the stronger manipulating game, made the season entertaining as hell, but failed to learn from the mistakes of people like Russell Hantz crying at the finale of Survivor after he lost to a very upset jury.

If you’re going to bite that hand that can give you half a million dollars, do yourself a favor and just nibble on it.. don’t bite off the whole thing.

Thanks for the great season to any cast members who read this, and thanks to all my readers!   I’ll be back for Big Brother 15, I hope you will be too!