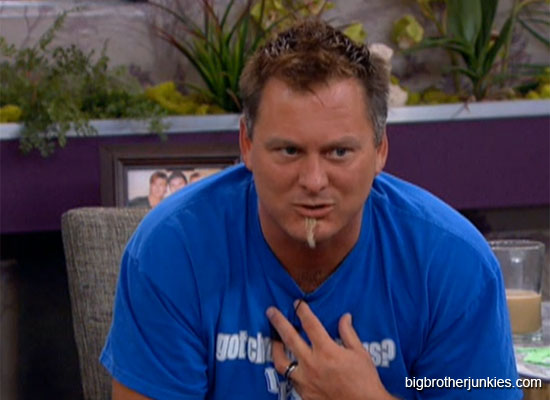 I have vital information, vote me out to learn it!

Well that was an interesting night on the live feeds in the Big Brother 14 house. Joe, who appears to have secured the votes needed to stay in the house decided to keep playing the game for some reason.  It all started around 9:30pm bbt on the feeds (if you want to flashback), and be aware you may have to watch one feed, then rewind and watch another feed to see everything happening in the house.

The meat of it is when Joe approached Jenn and decided “Hey, who is this tattoo’d fella with red in her hair? Is she new?  Maybe she’ll vote for me to stay too!“.  So he opens up with her trying a mix of sympathy combined with a few scoops of bribery.  His way to bribe?  This is hilarious, he tells Jenn that he has some vital information and if he’s voted out, go see him quickly before he’s out the door.

Hey Joe, if you’re trying to convince someone to keep you, don’t give them incentive to vote you out.  Are you serious?   If I were Jenn, I would have said “Oh man, now I’m definitely voting you out because I’m curious what this information is“.  So Joe, your big plan to stay in the house is give people reasons to vote you out?  Terrible.  Janelle got wind of it and said it perfectly “He’s such a bad player, this is why we have to keep him“.  She’s absolutely correct, you want someone like this in the house opposed to a Frank, it’s easy competition.  She’s going to fight tooth and nail to secure his vote throughout the day simply because the house can’t afford to lose him.

Read more after the jump…. (including some Janelle boobage slip)

Joe is like the old guy in Survivor who simply can’t compete, never wins a challenge and is basically a lump on a log. People keep him around until the final 5 or so then get rid of him at the last possible moment simply because they can.   That’s going to happen to Joe, he’s so bad at the game that people are going to keep him around just as a pawn to throw away when they no longer need his votes.   Poor Joe… and poor Frank for being on the block against that.

Wil has done a masterful job playing both sides of the house this week, so good that I’m not really sure where he stands.  He’s in team meetings with Boogie, Frank, etc and then running to Janelle laughing about it.  If that’s not enough, he’s then telling everyone he can that he’s tired of being on Janelle’s team and wants off.  Wil is playing a dangerous game that will likely blow up in his face if Frank is voted out, because he cannot keep up playing both sides as hard as he is for very long.  Right now he has both Frank and Joe thinking he’s voting to keep them, that should make tonight interesting at least…

In other news, today is the big day of live eviction and likely live endurance challenge, the big question will be whether or not the coaches enter the game.  I’m honestly not sure at this point because it’s incredibly unfair to the newbies to basically hand four veterans (including two former winners) a “golden key” for the first few weeks.  I know there are a lot of mixed feelings about it, and while it could shake up the game quite a bit, I am enjoying the team aspect of it.  I just think they should have started with 4 people per team and didn’t get rid of one on day 1.

And I mentioned a slip, so here is a sneak peek…

To see the full slip, sign up to the live feeds and go to 11:53bbt – camera 3 for some major slippage.

I’ll post something today if there is a lot of game talk, I may also just do a boredom live blog thread, but I will definitely be blogging the live show tonight on CBS, so come back here at 9pm est and follow for endurance updates.