Big Brother 14 – The PoV Was Not Used, But The Damage Done 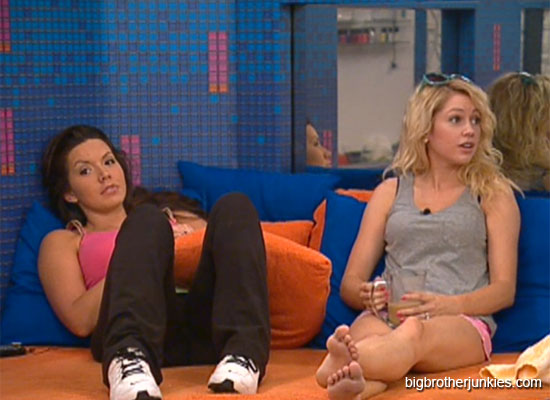 I wanted to do a morning post about this, but sadly I had to go to the Dr to check on some things.  I’m getting old, that happens.. ugh. Starting to feel like Mike Boogie.

Not to get sidetracked, last night was a pretty eventful night on the live feeds. All while Dan lay his head down peacefully for a warm summers sleep, the houseguests were stirring and contemplating chopping his head off. Well, maybe not that extreme, but the reality is that Frank was seriously considering on using the PoV on Joe today and replace him with Dan.   He’s still clearly bitter about Dan’s attempts at Frank the first few weeks, and has hinted he wanted to nominate him to begin with.  As we saw last night, Boogie talked him out of it, but when Mike is asleep, Frank’s blinky mind starts wandering.

Up in the HoH room, Frank chatted with Ian for a little while deciding on removing Joe from the block and replacing him with Dan.  He really, really wants Dan out of the house, and was willing to sacrifice any trust built up over the past 4-5 days in order to make it happen.  However, Frank made a key mistake, he was rambling to Ian about it instead of Boogie.

As soon as Ian left the HoH room after Frank was called to the DR, he fled outside and told Danielle and Britney immediately.  Now the two girls were left wondering if they should tell Dan and let him worry or wait until after the Pov.  They’re clearly not on board with the idea, but they also didn’t want to make waves if it didn’t happen.  However, this is Danielle we’re talking about, there was a clock ticking down in her head to tell Dan everything she knew before her head blew up.

While Frank was just talking with Ian and said he probably wouldn’t use the veto, fear and excitement went through the house except for probably Dan.  Ashley, Wil and Jenn had reason to celebrate because out of thin air they decided Frank was going to backdoor Shane this week, and pretty much convinced themselves it was going to happen.  Naturally they were wrong because Frank had a different target, but hey whatever helps those three sleep at night.

Needless to say it was a weird night in the Big Brother 14 house.  Frank slept on it, and apparently decided against using it, but that didn’t stop Britney and Danielle from running and telling Dan all about the near backdoor attempt.  What this means is that The Silent Six lasted roughly 5 days before it’s starting to crumble apart.

Because Frank was heavily contemplating it, the trust dropped to nothing and I think Brit/Danielle/Shane/Dan are likely going to be back alone in their alliance… well, with a possibility of Ian tagging along.  I have a feeling this is all going to blow up throughout the week despite not even using it.  By basically telling Dan he was a near target, he should have just ended up using it.  Don’t bluff because that will get an unneeded target on your back.  Frank bluffed, and now it’s not looking good for him at all.

On a random note, here is a picture of Jenn because I only have like 2 of her