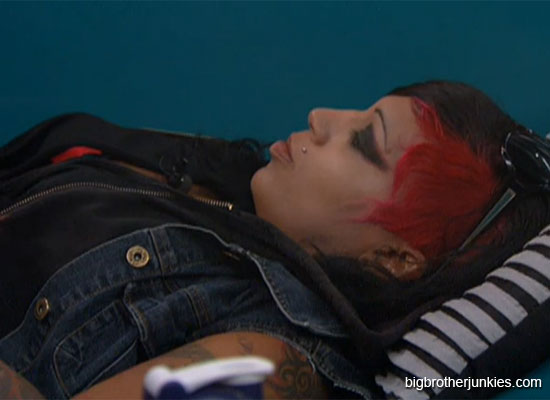 Ian, a self proclaimed Big Brother expert, a person who feels he can now coach future players, and someone who has been priding himself on getting rid of ‘big’ targets this season. Well, that Ian had a gun up to the biggest target of the entire season and chose to shoot the dead fish in the barrel instead. Way to go, buddy.. complete failure of an HoH yet again.

This is Ian’s 3rd HoH of the season, and it will be the 2nd non-threatening person who will be evicted on his watch.  The 3rd?  Well, he was a huge target, but has been one all season, so it’s not as if Ian had some genius moment and said ‘Wait a minute, if Frank stays, he’s going to win yet nobody is realizing that’.  Everyone realized that, and that’s why he was on the block every single week he wasn’t HoH. Ian was just fortunate enough that Frank made the mistake of keeping Dan in the game just a week earlier.

Watch Jenn unload on Ian after the PoV Meeting

Before I ramble too much, I need to explain that Ian put Shane and Jenn on the block.  Shane won PoV and removed himself, so Ian put up Danielle as the replacement nominee instead of Dan.

The only hope for a redemption of this season is if Dan wins HoH this week and gets Ian out of the house like he intended on doing during the live show.  I’m not sure if I’ll be able to stomach Ian in the final 2 trying to take credit for eliminating Boogie, Frank and keeping most of the quack pack together until the final 4.  Why?  Because the current jury is probably gullible enough to believe it and give him some votes that he doesn’t deserve.

I know people will say “Well he must be doing something right because he’s in the final 4”, let me remind people that Adam and Porsche were in the final 4 last year, and Kalia and Shelly were in the final 6 after floating throughout most of the season.  Without Boogie, he would have likely been the first person voted out, and then became fortunate enough to align with someone who nearly went down in flames for him (Dan).

That being said, he certainly has played a better game than Danielle, Jenn and probably even Shane, which is why his biggest chance to win was to get rid of the only guy who probably can beat him in the finals.

Do you think Ian made the right move in nominating Danielle?  Let’s hear it.

Note, there will be an eviction tomorrow night and the live feeds will likely be down until after the show on Wed night, but I’ll do my best to see if I can get any leaks.