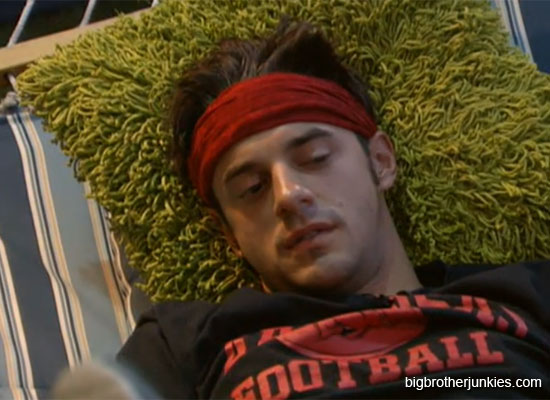 Of course, no competition this season can go without a little controversy. According to what I’m hearing, this afternoon in the Big Brother 14 house, when the houseguests were pulling the chips from the bag, I guess something strange happened with Frank’s.  While some are saying he cheated, others are saying he didn’t.  From what I gather, Boogie picked Ian for houseguest’s choice, then Frank picked Ian’s chip.  Obviously he had to re-draw and also picked houseguest’s choice, but I think they had him stage a re-draw for CBS.  He held on to his HG choice chip and pretended to pull that out of the bag so we watch it next Wed.  Doesn’t sound like a big deal, but if he did cheat I expect to hear more details on it.

Now, to the juicy stuff… this was a real ideal situation for Boogie and Frank as 2 of the weakest HG’s were picked to play along (Ashley and Jenn).  Ian was obviously also picked, and he’s going to be weak if it’s anything physical… plus he doesn’t like to get involved, so he’d probably throw it even if it’s spelling (which some are guessing it is). Basically it comes down to Frank, Boogie and Shane for the PoV competition, so there is a 66% chance of someone being removed…

The winner of the PoV is….

(note: I wrote the above stuff at 3pm est.  The feeds were down for about 6 hours and they put them back up only after the backyard was cleaned up and open again.)

It looks like he’ll finally be able to have a vote this Thursday, his first all season.  That’s quite a run to last half a season without a single vote.

I spent about 6 hours watching the trivia waiting for this information, now it’s time to take a little break.  Sign up to the live feeds to see how the house reacts to this.