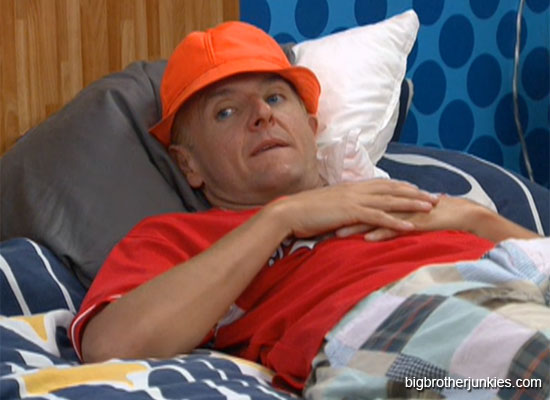 Things are not looking good for Boogster

I made a post talking about who was going to go up between Dan and Jenn earlier, and it will create a path for the rest of the season one way or another.  Well, the decision has been made, and Shane chose to put Jenn on the block as a pawn to try and get Boogie out.

While things are looking bad for Boogie, well, they’re looking bad.. there is no bright side about it.  If you’re a Mike Boogie fan, things are looking grim unless they can manage to sway a few votes.  There is a long road to climb for Team Boogie, but considering he was able to get Janelle out, I’m not ruling out a Jenn elimination on Thursday… it’s a longshot, but it’s possible.  Boogie is no Joe or Wil, he’s not going to go out without a fight.

Needless to say, Boogie is laying in bed right now upset about the decision, so he’s venting to Frank and talking tough about how he’s going to ‘punk’ Shane in the DR and make fun of him, blah blah.  I’m going to keep updating this thread but wanted to get something out there so my viewers can know what happened… keep refreshing…

12:10pm bbt – Boogie is laying around talking with Jenn, Ian and Frank about how Dan is basically going to win the game now.  He’s right, but the funny part is Ian doesn’t see this.  I think he’s happy to be part of the game and is trying hard to just make an impact one way or another.

12:28pm bbt – Boogie and Frank make their way to the kitchen to start the bully routine on Shane.  Boogie tells Shane that he’s looking like Dan’s bitch on TV, and that he should worry because he’ll be sitting on the sidelines while everyone else plays for HoH.   Shane asks if that’s a threat and Boogie says “No, I’m already going home, I won’t be here.  Frank will finish it though”.   The ironic part of all of this?   While Shane may be Dan’s bitch, Frank doesn’t realize he’s Boogie’s.

12:40pm bbt – Boogie is still fuming about it. He’s trying to be passive aggressive by saying “3rd place money and I get to enjoy the rest of my summer” (because he has picked up $16k in prizes + stipend + free publicity) while “complimenting” how good Dan is.  It’s going to be a long week in the house for Shane and Dan, watch the feeds here.

12:46pm bbt – Frank and Boogie are now working Joe for a vote.  Frank keeps mentioning them having 5, I wonder if they realize Ian’s in their pocket yet.

I just re-read this post and wow is it sloppy.  I guess that happens when I’m in a rush to make a post.  I’ll keep updating this and twitter but likely create a new post summarizing things later on.