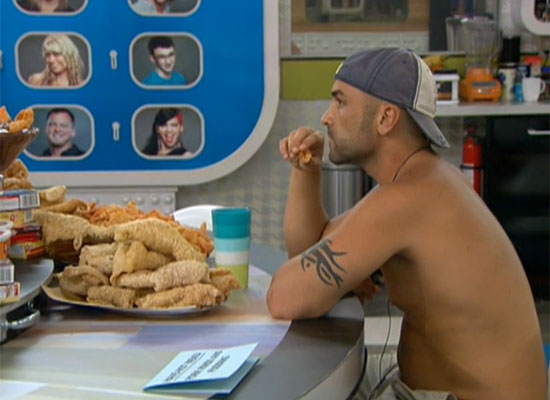 Big Brother 14 – Willie Expelled From The Game And Nominations Revealed

I mentioned earlier in the day that Willie was going to try and get kicked out of the game, and I guess that did happen tonight in what was a wild finish to the coaches challenge. To get a full recap of the events, pull up the live feeds and flashback to 9:10bbt 7/20 as Ian describes the event to the house/cameras.

If you don’t have the live feeds, it’s strongly recommended you get them and click on the button below to get 3 free days. Flashback and hear about the drama.

Spoilers after the jump if you want to wait until Sunday night to see what happened, otherwise continue reading…

According to Ian, the coaches challenge came down to Janelle and Boogie once again, in which Mike ended up jumping off and giving the win to Janelle.  Based on what happens next, I wouldn’t blame him if he threw the challenge.

Janelle was given the chance to save someone as we all knew, and she chose Ashley.  What we didn’t know was that she could pick all the have-nots for the week, and ended up picking Ian (who volunteered) and the Willie trio (Willie, Shane, JoJo).  This completely set off Shifty Willie as he started slamming stuff around and giving everyone in the house attitude.  The feeds came back up and I saw him eating his pork rinds at the table looking very miserable (above), but the feeds shortly went back to trivia and I think that’s when things exploded.

In the bathroom, there was some shoving and headbutting between Joe and Willie, then when he (Willie) was called to the DR, Joe was told not to follow despite Willie egging him on like the punk he is.  On the way there he threw some pork rinds at Janelle who waved him off with a big FU.

Willie quickly ranks up there now as the lowest scum of reality contestants there has ever been.  He went from acting like king of the house to being a spoiled baby as soon as he didn’t get his way.  Trying to pick a fight with Joe was the lowest of low.  Even Russell, the “evil villain” of reality TV didn’t stoop to that level when he lost.  Sure he cried and acted like a major sore loser on live TV, but to try and pick a fight?  Come on.  Terrible.  Russell had a passion for winning, Willie was just a punk that was allowed to enter the house because of his name.

The games must go on, and while they did get a pizza party due to the eviction to try and calm some tension (including the have-nots), nominations were also held at some point.  It appears Shane and JoJo are nominated, and we could be down to the final 8 just two weeks in.  I have a feeling a big shift is going to happen in the house, perhaps Kara comes back, maybe the coaches do indeed enter as players, but there is no way they can continue at this pace.

Again, be sure to pick up the live feeds to continue to follow along this story, find out if someone makes it back in after the eviction.