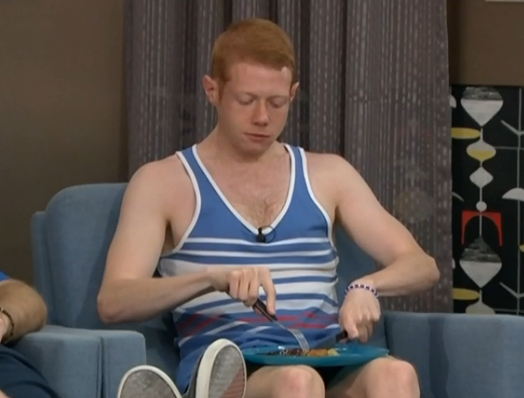 This week is coming up Andy

In under 12 hours from now, the final 3 will consist of an alliance called ‘The Exterminators’, and it’s a pretty fitting name for this group of people.  Not only did they exterminate some of the tougher players, but they also managed to exterminate a lot of the interest in the finale by many fans.

The feeds went dark on Tuesday for the eviction, HoH competition and PoV challenge which all took place before they came back up at 12am est last night (this morning).  When they returned, we learned that Spencer and McCrae were nominated, and Andy won the PoV which means he likely kept the nominations the same.  There was no real power shift and no last minute deals by McCrae to save himself.  The final 3 will likely consist of Spencer, GinaMarie and Andy.

This final 3 has to be even worse than BB13’s finale, which featured two of the biggest floaters in Big Brother history sitting next to Rachel. This year we have Spencer (Adam), GinaMarie (Porsche), and Andy (who is nothing like Rachel).   I don’t even know what to say about it at this point.  What is there to say?   I can’t really say I’m looking forward to watching the three of them sit around and bash former houseguests 95% of the time they’re awake.    Any strategy is going to consist of them all promising each other final 2 deals and one of them being disappointed on Wednesday night.

That said, I am curious to know this…