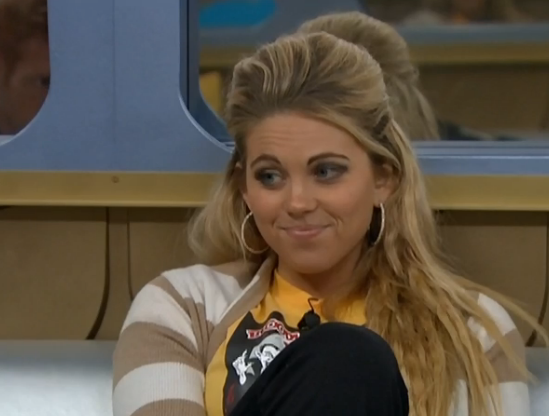 Yes Andy, come to the dark side

Big Brother 15 – Andy Has To Stop Being The Nice Guy

8:00pm Update – Big Brother is delayed a few minutes due to golf.  CBS will never figure out that sports run late, but luckily it only happens once in awhile to Big Brother. It’s much worse for The Amazing Race!

As I said below, not much happened in the house today, it’s dead.  Not much strategy, and everyone hanging out for the PoV meeting tomorrow which we’ll find out that Andy won’t use it and Jessie will go home this week. Snoozer.

Since I have a few people checking this out from the Sunday night episode, I want to give some plugs and reminders:

– Follow me on twitter or facebook. I update there more than this site.
– If you want to join the live feeds, you can do so by clicking here
– To donate to Big Brother Junkies, click here for the donate page

Ok, I’m done with my 8:00pm update, now you can continue to read the thread from earlier this morning regarding potential strategy options…

After winning the PoV last night, Andy has the ability to finally make a huge move in the game and get rid of one of the power people this season.  From listening to him talk about it with Aaryn, it sounds like we’ll watch Jessie walk through the door this Thursday as America lets out a collective groan.

Andy said he wants to sit back and let Helen and Amanda duke it out because he likes them both and doesn’t want either of them mad at him.  There you have it, folks.. that is how Andy lost half a million dollars.   It’s sad because with Andy playing without a spine and Jessie walking out the door, the options of rooting for someone get smaller and smaller.  I’d like to root for Elissa, but she is her sister’s most hated type of player, a huge floater.  When she actually realizes she’s in the house, maybe I can root for her to win, but I hate seeing people do nothing all summer and make it to the end (Porsche, Adam, etc).

On the bright side, there is a very huge chance that one of the jury members comes back in the game, and if they do (Judd, Judd, Judd!), that will give us someone to pull for.  Speaking of Judd, I had a dream he was still in the house and someone else got evicted. As they were leaving, they were cussing out Judd for being the MVP and backdooring them, while Judd sat there not knowing what he was talking about.  I think that’s a sign Judd needs to come back in the house to get a fair shake.  The MVP twist killed him because Amanda simply didn’t want to believe that America would be nominating her, so she blamed Judd.

McCrae is aware that Judd could re-enter the house (flashback to 10:25pm or so) as he suggests the first 4 people in jury could square off, or return with a vote from America.  Because of this twist, he wants to get out Elissa asap so America will vote her back in over Judd, and he’s 100% correct that would happen.  That is exactly why I suggested Andy blindside McCrae this week instead of Amanda because he’s not only the physical threat of that alliance, he is very aware of the game. Amanda is definitely a threat, but she uses more bully tactics that are wearing thin on the house.  When little Jessie is not even scared of Amanda any more, it shows where she’ll be in the house alone.

While living with Amanda may be a nightmare after McCrae leaves, that would be a win-win because it would not only create drama, but pretty much prevent her from winning any jury votes should she make the final 2.   McCrae remaining in the house would remain crafty and adapt to the situation, kind of like Aaryn did without Jeremy. The girl who was supposed to go home on day 35 can easily make it to the top 7 or even top 5 now.  Now add some likability to that person, and you have McCrae.

Anyway, I suspect it to be a very slow day in the house.  The veto ceremony isn’t until tomorrow, so unless Big Brother throws in some random surprise, there should be a whole lot of nothing going on today.  I may take this opportunity to pop out and run some errands for a bit, but I’ll have an update before the show tonight.