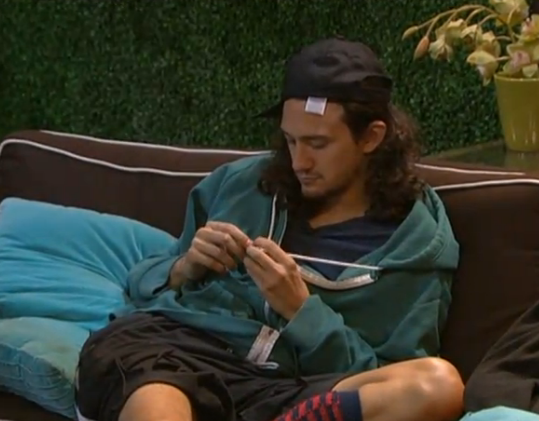 Big Brother 15 – Maybe We’ll Get A Big Move Next Week?

As of today, it appears this is going to be yet another slow week in the Big Brother house.  Kind of shocking, kind of disappointing, but mostly frustrating.  I posted last night how Spencer and Jessie were nominated for eviction, and the big plan is hope Jessie doesn’t win veto.  Even if she does, the backup plan is to put GinaMarie in her place and send her home.  Snoozer.

I know it’s not a popular opinion because everyone seems to hate Amanda right now, but at this point I’m almost rooting for her to win.  Why?  Because I hate bad gameplay and it was absolutely stupid of the house to sit on their hands when they had 2 straight chances to get her out of the house.  Jessie was the only one with the guts to try anything, and she was just met with resistance from Helen despite Helen wanting Amanda out!

Yes, the same time Helen was debating with Jessie on why she should keep Amanda in, she was telling the diary room how she needs to get Amanda out soon, but she’s worried she’ll be the target once that happens.  Her idea is to pass up a prime opportunity to get a huge threat out and just wait to see what happens.  It’s reasons like that why it’s hard to root for Helen in this game.

(I still can’t fully root for Amanda because then conspiracy theorists will think the big plan to have her win was correct, so for now I’ll root for Jessie.  Jessie is an underdog right now, and I love me a good underdog story.)

While Helen passed up two solid chances to get Amanda out, McCranda have been plotting on ways to remain in the house down the stretch run.  They see what’s going to be happening soon, and they’re trying to plan ahead.  The current idea is for McCrae to ‘flip’ on Amanda and try to join a final 3 deal with Helen and Andy. Ideally this will prevent McCrae and Amanda from sitting on the block together which is nightmare scenario for the pair.   The first chance they get, they’re going to get Helen out and just ride the floaters to the end, picking them off one at a time.

I am not sure if this plan will work because Helen is already thinking that McCrae is a pretty big threat due to his ability to win competitions over Amanda.  I couldn’t imagine her really sticking with that final 3 deal, so while it may seem like a good plan in theory, I doubt it will work.  If they don’t have a backup plan, Helen very well could have the advantage now that they voted out their own alliance member last week (Judd).

That’s where the house stands right now, but this is a pretty key veto today.  Jessie basically has to win or she’s out of the game.  She’ll have 4 people playing to keep the noms the same, and the other person playing to swap pawns.  I’m sure a majority of my readers will be pulling for this to happen, so I’ll keep you updated as soon as I find out who wins today.