Big Brother 15 – Elissa Tries To Save Helen But Fails 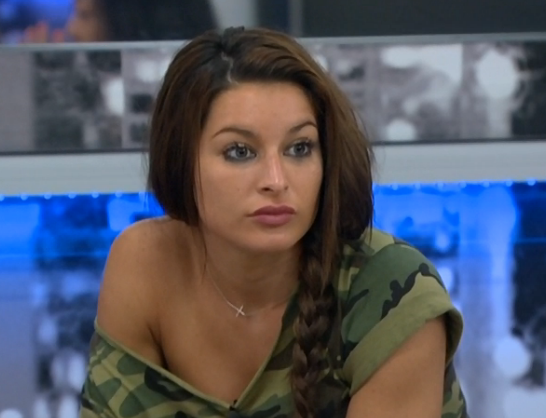 Update: I’ve had some annoying server issues today.  Let me know if you still have some by reaching me at https://www.bigbrotherjunkies.com/wp-content/uploads/2011/07/big-brother13-guests-enter-1.jpg (at) bigbrotherjunkies (dot) com

Elissa gave a last ditch effort to save her only real friend and ally in the house yesterday, but it backfired to the point of tears.  Flashback to around 1:00pm and watch it all if you have time, but if you don’t, I’ll try to summarize the afternoon for you here….

As the eviction draws near, Helen and Elissa went up to the HoH room for one more talk with Aaryn.  This was one of the weirder conversations I’ve seen in awhile, especially when Elissa tried to stray off course and act out a sneaky plan she came up with.  Throughout the conversation, Elissa was in serious bitch-mode to a point that had Helen confused.  She basically kept saying how her and Helen are not a pair, and completely downplaying their bond.  With eviction a day away, hearing her one ally talk like that started to hurt Helen, but she kept her cool.

To be fair to Elissa, this was her strategy, and it would have been a good one had it been used about a month ago.  Elissa was simply trying to downplay her alliance with Helen to Aaryn so everyone felt like ‘equal partners’ if they were to team up.  This is in stark contrast to Elissa’s former strategy of just ignoring anyone not named Helen.

When Aaryn left the room to call up reinforcements (Amanda), Elissa explained to Helen what she was doing, so it did make a little more sense.  As Amanda pointed out later, it would have been like her and McCrae suddenly acting like they were not working together, but Amanda forgot about the fake F3 with Helen/Andy/McCrae.  He was able to pull that strategy off pretty well, but Elissa just failed at it…. hey, at least she tried.  It’s more than I can say about her gameplay for the first 2 months of the season.

At some point during the conversation, Andy did his thing and entered the room only to have all that attention aimed at him.  He sat down and was completely slammed by both Helen and Elissa on loyalty, what America wants, and how bullying is bad.  The pair then proceeded to tell Andy that if he doesn’t vote for Helen this week, he is going to be the target of Elissa, Helen (if she stays), Aaryn and GinaMarie.  Nothing like a little bullying to get the point across that bullying is bad – right?   Anyway, to my surprise, Andy snapped back and said he felt threatened and they’re not helping their case at all.  Flashback to around 1:40 to see Andy defend himself.

Finally, just as Elissa was trying to finish the sentence, ‘You’re going to let a 28 year old real estate agent… ‘, Amanda walks through the door to crank the tension up to an 11.  She instantly starts asking who is talking bad about her, what they’re saying, and wants to clear it all up.  When Amanda asked Elissa if her name was brought up at all in the past few hours, Elissa just stared at her blankly (see the above picture) until the subject was changed.

The group continued the pretty tense conversation until Andy brought up the bullying again, this time in front of Amanda.  He mentioned how he felt threatened earlier and it was making him sad, but that did not go over well with Elissa.  She said that was just a BB tactic (which it is), and it wasn’t bullying or threatening.  This is the part that bothers me, and I’ll explain (wow am I rambling today)….

As a Big Brother fan, I don’t care about that tactic… if it works, use it.  I didn’t care when Jeremy used it, didn’t care when Amanda used it, and don’t care that Elissa tried to use it.  The problem I DO have with it is Helen’s constant preaching about good versus evil and how bad bullying is in the game.  She’s trying to win with integrity, blah, blah… but then her and her ally do the very thing they preach against.  There is nothing worse than a pity party in the house, and that’s what Helen has been throwing all week.

In this situation, I applaud Elissa for actually trying to play, even if she failed.  I applaud Andy for calling out the bullshit of the pity party.  Finally, I applaud Amanda for doing exactly what she said she’d do, and having it work.  Hours after the fight, Amanda was already hanging around with Elissa and Helen and I have absolutely no doubt that if Elissa wins HoH tonight, Amanda will have an influence in the nominations.  Despite people even saying ‘It’s Amanda’s house, we’re all living in it’, they continue to do whatever she says.  It’s crazy, but fascinating. 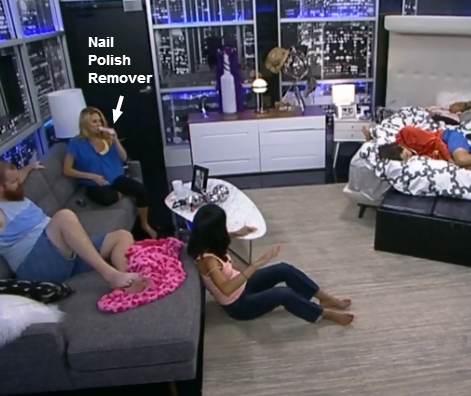 In other news – The stress is getting to everyone this week.  Flashback to 7:52pm to watch Aaryn sit down on the chair and take a drink from her nail polish remover.   She went to the DR, they probably had her puke a bit, gave her drinks, etc and she was back and ok by 8:15pm.  I’m sure there are going to be countless snarky comments on this, but please save them.  Drinking that is no joke and it would have sucked for anyone to leave the game because of it.

Anyway, prediction thread soon.  I am not sure I’ll do an update thread today because Thursday’s are usually filled with the house prepping for tonight, but we’ll see.