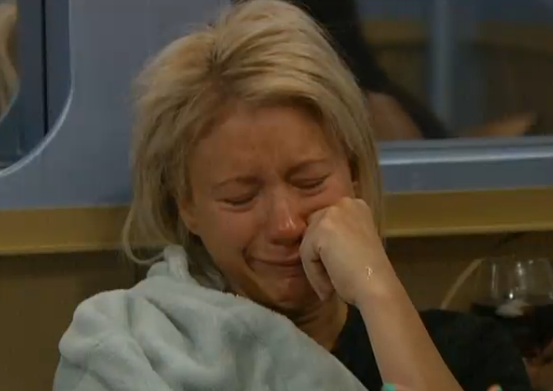 This is how I react after every blog I publish, too

Luckily it’s been a slow day in the Big Brother house so I can just sit here and focus on how expensive cars are.  I bring my car in for a little noise in the engine and it turns out my water pump is making crazy sounds and is ready to break.  Between that and another thing, boom, $400 down the drain.  It’s the first time the mechanic has ever seen a water pump go at 40k miles…  I’m glad I’m his first?   Typical luck.  I guess I’ll be panhandling for the next few days, not like I had any pride left.  If you’d like to donate, here is the link, now let me shower…

Ok, so the biggest news of the day was the reaction GinaMarie had after writing her HoH blog post.  As you can see above, it wasn’t a very good reaction.  She feels she misspelled a lot of words and sounded stupid, and for some reason it struck a cord.  My brother always used to tease me for my writing – always – and even though I never cared about being the smartest in the room, it can hurt.  I have no idea why I blog, how I am able to blog, and why people read my stuff.  This isn’t a pity party on me, I’ve learned to tune out negative comments about writing but watching GM react this way brings back memories.

It’s always a weird reminder when you see people who act like they don’t care if they’re smart or not suddenly break down over these issues.  It just gives people a reminder that despite the hard exterior some like to give off, most people are softies inside.  Speaking of, I think this is the softer side of me showing through right now.  The reason I questioned the feeling bad for GinaMarie is because, despite some early stupid comments, she made a pretty big mistake coming on the show.  She lost her job doing probably one of the few things she’s good at, looks like a stage 5 clinger to a guy who didn’t even like her, and doesn’t come off as the sharpest knife in the drawer.

In other news, Jessie seems to be the biggest girlfriend material in the house right now. That’s not too surprising considering the mean spirit some of the other girls have displayed this season.  I think tomorrow I may do a similar one for the guys.

I don’t really have much else to say, it’s an extremely boring time in the house right now, but I’m hoping it will pick up the closer we get to eviction.