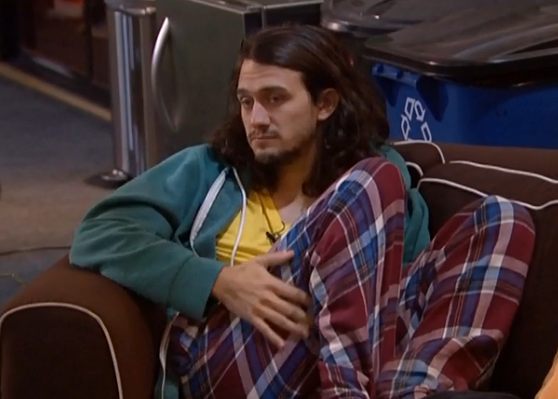 How far will McCrae and his PJ's go?

Before I begin, I noticed that Survivor is doing something they’ve never done before in their history.  They’re bringing former players back to compete in the game!  I know, try to contain yourselves, I’m just as shocked as you are.  This is BB relevant for two reasons..

You can all understand #1, but why is #2 relevant?  Colton was the male version of Aaryn that season, and that’s just the part that made the air.  He made racial slurs (but it was ‘ok’, his housekeeper is black), and made pretty terrible remarks about everyone around him.  The parts that made the air were bad, I can only imagine how he’d be if Survivor had live feeds …..

So, the fact that one of the biggest d-bags in Survivor history has been given a second chance (after another big d-bag – Brendan Hantz – was also given a second shot), this makes me think BB15 may not be the last we’ll see of Aaryn and/or Amanda.  Give Big Brother 1-2 more seasons, and suddenly Aaryn and Amanda make perfect ‘villain’ characters in a ‘heroes vs villains’ type of season, and people will love it.  Yes, despite your hatred of them now, people will love those two returning as the known ‘villain’ role.

Back to the actual BB15 house since that’s what you came here to read….

After I stopped my live update thread last night, things in the house remained tense but calm.  One thing is for sure, Aaryn’s bashing of McCranda all week is not going unnoticed by the couple.  Much like Judd and also Jessie, at this point all Aaryn had to do was shut up and she would have been guaranteed a spot in likely final 4, but her HoH week has been pretty brutal for her game this season.

Listening to Helen go on and on and on and on about various things, Aaryn has let it slip that she’s not really big fans of the Amanda and McCrae alliance and knows it will be tough if they’re in the final 3 together.  While that’s completely understandable to think that, letting it slip is where she made the mistake.  When you bash your f4 alliance behind their back, you may as well backdoor them and start getting them out.

Aaryn was scared to put McCrae or Amanda on the block this week because if she didn’t have the numbers, she’d be a target.  The problem is, running her mouth has basically created the same problem minus the actual attempt to get rid of one of them.  Good job, Aaryn.  You put a target on your back when you didn’t need to… the theme of the Big Brother 15 season I suppose.

The tension in the house is building quite a bit, and I expect Thursday night to be one hell of a show.  A jury member will return, and all 4 of the potential returnees could stir up quite a bit of drama (unless Spencer becomes one, but he shouldn’t).  As for those speculating, if the returning player does not receive auto HoH (which would be sweet), they should be guaranteed a week of safety regardless.  I’m pretty sure they did that in BB13 and I see no reason why they wouldn’t do the same here.

I have a few errands to run this morning (oil change, etc), but I’m sure the house will still be sleeping when I return.  I’ll get started on the live update thread when I am back!

Update: Correction, Brendan was not giving a week of safety when he returned.   I must have been thinking of this twist on the countless other reality shows that use it.