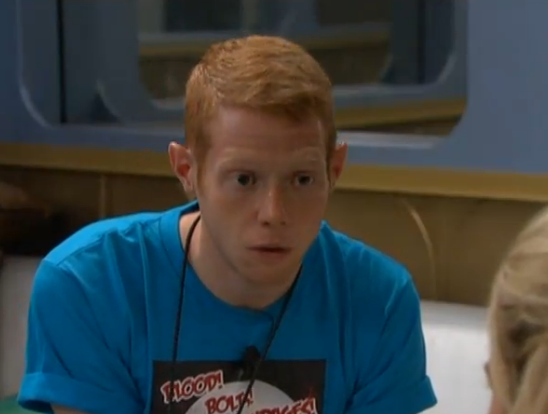 I will admit, for the first 6 weeks of the Big Brother 15 season, I honestly thought Elissa was just going to cruise through as a non-threat who appeared to be using Big Brother as a launching pad for a future career in a yoga tv show (she even has a name for it – Elissacise).  Her social game was horrific, strategically she was a mess, and her performance in competitions was very un-Rachellike.

Something woke her up last week when she was nominated along her only friend in the house, Helen.  I think she said more words to people in the house during a 2-3 day span than she had all season, and she had fire in her eyes during both the veto competition, and the endurance HoH challenge.  While it still may be too late to save her game, this version of Elissa is pretty scary if you’re a member of the house.  Instead of sulking over the loss of Helen, she instantly picked up Judd, and has been warming up to GinaMarie.   If that trio actually forms into a real alliance, it could be the perfect storm of passion, competitiveness and craziness required to make it to the final 3.

I’m still not sure her strategy is up to par yet, as I think her complete disdain for Aaryn is clouding her judgement (like it has all season), but it’s improving. While I think it’s a solid move to get Aaryn out, the obvious move would have been to put up McCrae vs Amanda to guarantee that power duo will be split up.  Elissa wanted, and still wants Aaryn out this week, but she is basically taking herself out in the process.

With Amanda winning the veto, McCrae will be removed from the block tomorrow, and Elissa has to find a replacement for him.

To get Aaryn out, these are Elissa’s current options

Judd – Not going to happen, he has become her new ally in the house.
Spencer – Amanda, McCrae and GinaMarie would likely vote to keep Aaryn in this case. Spencer goes to jury
GinaMarie – Amanda, McCrae would vote her out.  Judd would vote out GM.  This swing votes would be Spencer and Andy.  Right now, they’re loyal to Amanda.
Andy – This is a tough one. Amanda wants Aaryn, McCrae wants Andy… they will vote to keep Aaryn, but it will build tension between them.   Like Spencer, GM would likely vote to keep Aaryn, and Andy goes to Jury.

Looking at that, the most realistic way to get out Aaryn would be to put up GM and cut deals with Andy and Spencer to vote her out.  Even that’s not a very good option because she can’t really trust either of them, and GM very well could walk out the door.

Needless to say, under the current situation, Spencer, GM or Andy could very well be walking out the door this week while the Big 3 remain together.  I think Elissa is going to regret not putting up Amanda vs McCrae on Thursday night.  It’s still a very long week, but her options are not very good right now.

Oops, I ended up rambling about strategy instead of the house.  There are some timestamps under my Saturday Update thread, and there are some nasty comments about each other throughout the day.  This is the slow boil drama that has potential to stew for a few more days before blowing up into craziness sometime around Tue or Wed.