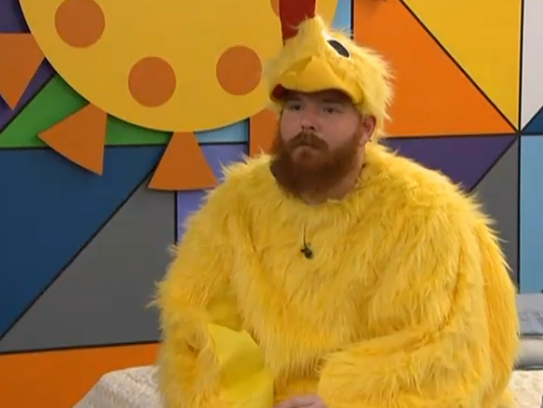 Back on the block again

Big Brother 15 – It’s Never Good When Everyone Is Happy

When the HoH competition was over last night, and the feeds finally returned, GinaMarie had the key around her neck and it appeared everyone in the house was happy about it.  The problem with everyone being happy means that some are clueless of what’s about to happen, and it appears those people are Amanda and McCrae.  While that’s bad for them, it’s great for live feed watchers because if Amanda is indeed nominated today, she’s going to lose her mind.

Last night on the feeds at roughly 10:45pm, Amanda was in the living room painting her nails and Spencer, Andy and Elissa were sitting nearby chatting.  Throughout the conversation, Elissa kept taking the backhanded shots at Amanda, while Amanda took direct shots back.  When I say backhanded, an example would be Elissa talking about how much she got along with Jessie.  When Amanda asked about the day Hurricane Jessie appeared and called her Rachel’s Shadow all day, Elissa’s reply was “I thought it was funny, she at least kept it game related.  She didn’t get personal like trash would do”  (something along those lines).  That is Elissa’s M.O., and it is very effective against Amanda.

I’m not bashing Elissa by any means, that’s her style and it’s going to now get her further in the game than Amanda.  Throughout the season, she has insulted nearly every person in the house through those backhanded channels, but has a very solid chance of making the final 5.  Amanda’s more direct approach at insults made her look batshit crazy at times, especially on highlight reels (or should I say lowlight).  It’s also going to be the reason she will be on the block this week instead of the person she thinks will be there.

At around 9:00pm, after one of the many Amanda/GM chat sessions, GinaMarie looked up at the camera and said that Amanda is going on the block.  Not only will she be furious about this, but she’s going to feel extremely stupid after guaranteeing Elissa would be on the block this week.  That double combo may result in some intense fights and craziness we haven’t even seen yet.

If you signed up for the feeds last night thinking you were going to watch the HoH competition, keep them for another day or two (or a week or two) because this could be some exciting stuff.  If you didn’t sign up, you can now, or you can wait until I give flashback times, but you’re probably going to want to see this play out.

The special competition should be held today, as well as the nomination ceremony.  I’m going to start a Friday Update thread soon, but I am going to be a bit late because the feeds will probably be down for a good portion of the afternoon due to the nomination/comp.  Tonight should be a fun night to blog.