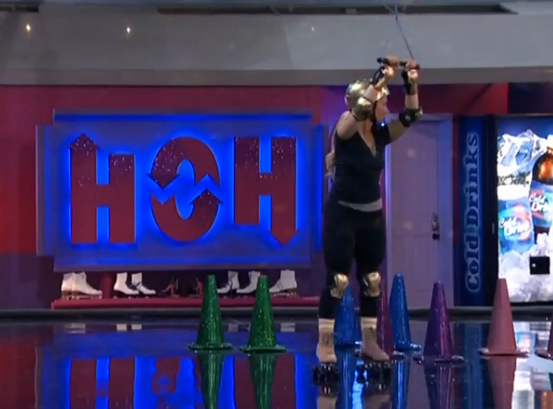 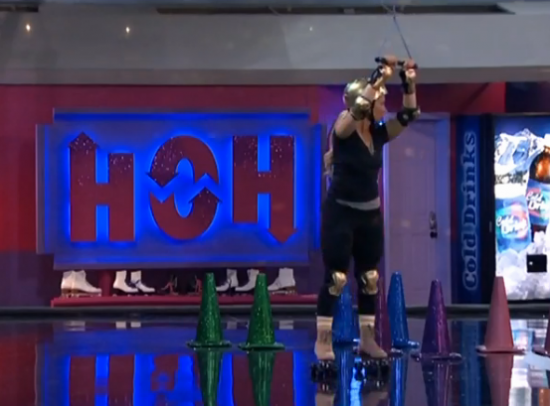 The final 3 had their first part of the final HoH challenge last night, and like expected, it was an endurance challenge.  Seeing as Julie gave no indication of when it would be played, and considering the feeds were down until after midnight est, I chalked it up to them doing the competition behind the trivia.  I didn’t want to promote a live endurance challenge only to be screwed over again.

The competition was a challenge where they wore roller skates and held on to some thing as they went around in a circle  (my guess is the roller skate thing is a nudge at Nick’s alleged professional roller skating career).  Like expected, Spencer went down first, so it was up to a competition between Andy and GinaMarie.   Spencer said he lasted about 8 minutes (that’s not what she said), so the endurance challenge lasted a solid 30 minutes or so.  Pretty anticlimactic compared to season 8’s seven hour marathon.

When the floor started getting wet and slippery, Andy fell and GinaMarie won the first part of the HoH challenge.  This guarantees GM a spot in round 3 of the HoH competition that will take place live on Wednesday night.  She will face off against the winner of round 2 which will be played sometime over the next few days.  Both Andy and Spencer are pretty weak competitors, so it’s pretty much a coin flip who will win this.  What I am fairly sure on is that round 3 will be another trivia competition, and GM has actually done fairly well on those challenges.  I think she’ll beat Spencer in round 3 with ease, but would struggle more against Andy.  If I were her, I’d be hoping for a Spencer win in round 2..

So there you have it, the final 3 is set, and half of the final round is set.  We know for sure GinaMarie has a 50/50 chance to win the HoH now, and probably a 50/50 chance at beating Andy if they were final 2.  At this point, Andy has to win the next 2 rounds to have a shot at winning Big Brother because I can’t honestly see GM or Spencer picking Andy to sit next to them in the finals… that’s Big Brother suicide.  A few weeks ago, when Andy betrayed many of his friends, he claimed he had a better shot at going to the finals with the exterminators than with McCranda.  I said that’s incorrect because Andy’s social game to that point would have required him to win his way into the final 2 regardless of his opponents.  The only thing Andy managed to do with that decision was to upset a few members of the jury, so congrats to him on 3rd place unless he wins the next 2 competitions.

(side note: I think Andy would have beaten Amanda and McCrae in this endurance challenge)