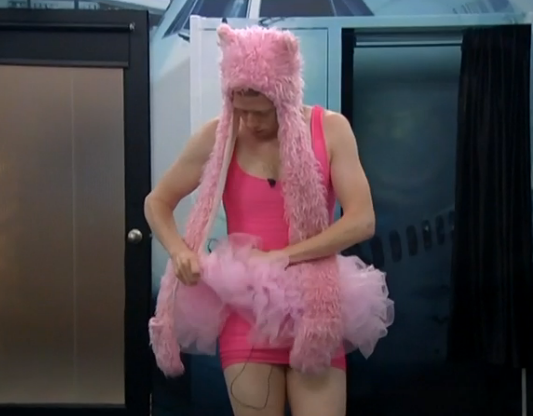 The last Thursday of the Big Brother 15 season.  I don’t know what to think about it.  Summer is ending, football season is starting, but now we get to deal with the very, very long winter waiting for Big Brother 16 to start…

You heard that right!  CBS confirmed there will be a 16th season next summer, so don’t forget to follow me on twitter or facebook to get updates on that.  I know what you’re thinking, and I’m way ahead of you.  The chances of racist or bigoted comments will be slim to none next year.  Not only will they screen cast members better, most Big Brother fans have witnessed the incredible backlash against Aaryn, GinaMarie, and crew.  They’re going to think before they speak, I can almost promise you this.  Will that make it bland?  I doubt it, because nothing is more exciting than strategic gameplay and tight alliances you’re really rooting for.

I have a strong feeling tonight will start the 3 part HoH challenge, so I’m going to wrap this up and begin the live updates.  If it is indeed an endurance challenge, I will bump that to the beginning of this post and give you updates on the first part winner.

6:00pm – Here we go!   I expect the first 15 minutes to show what happened since Tuesday.  Nominations, veto, etc

– FYI, Andy wins this game with ease if he’s in the final 2.

6:10pm – Still showing highlights about the nominations.  Spencer and McCrae were nominated.

6:15pm – Jury house footage. Aaryn apologized to Candice and Helen for the things she said. Candice is pretty much ignoring her.

– After a commercial break, it’s time to see Judd enter the all female jury

– Amanda called GM a floater, and Judd told her that McCrae rode her coattails.  Candice agrees with Judd, in fact pretty much everyone but Amanda thinks McCrae was a floater

– Andy won the veto first attempt.  Not too surprising considering how much he studied what happened this summer

6:45pm – Julie tells us just before they went live, the group came clean about their alliance to McCrae.

– Andy doesn’t use the PoV

– McCrae gives a few shoutouts.. next year, someone better give BBJ a shoutout.

– McCrae thinks Andy wanted to get Amanda out so they can work together…. wow….