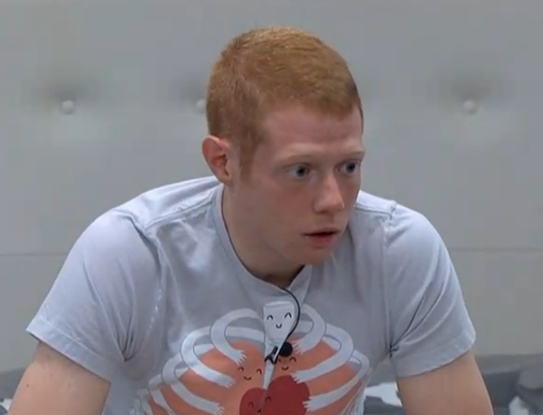 Who will control Andy this week? Amanda or Helen

The reign of Andy has begun in the Big Brother 15 house, and so far it’s off to a pretty unimpressive start.  Don’t feel bad, Andy. I can’t think of a single HoH this season who has made any real bold moves on their own.  Last night’s blindside of Judd was the biggest of the season, and Aaryn had to kill it by saying she was going to be evicted had she not done it.  I try to leave personal issues aside because I’m in the business of blogging strategy and gameplay, not moral issues.  I touch on the subject once in awhile, but many other blogs share their 2 cents about comments made in the house, so I let them handle it.

When it comes to actual gameplay, the Big Brother 15 cast has been nothing short of a disappointment.  The frustrating part is, the best moves of the season were made during a time when Aaryn and GinaMarie were making headlines over running their mouths.  The MVP twist created a few blindsides early on, and had one final kick in the balls on the way out when it got rid of Judd.  Ironically, the MVP twist was ‘over’ at that point, but Judd left the house because everyone thought he was the secret MVP and it cost him a spot in the game.

Back to Andy, when one of his first questions as HoH was whether or not he should open Pandora’s Box should he be given a chance.  That, combined with everyone else just ‘going with the majority’, I wonder when Big Brother became a game of ‘Just go with the flow, and make it to jury’.   It’s a small rant, but it’s just been a bit frustrating to watch a bunch of people hoping to make the final 7 so they are guaranteed an extra $5k or so dollars.

Keep checking back for updates

6:40pm – Helen talking to Andy about the move. Helen isn’t thrilled, she wanted McCrae and Amanda up, but she’s playing it off like she’s ok

6:50pm – Amanda has been talking with McCrae about how he should make a final 3 deal with Andy and Helen.  Her thought process is that it will prevent Helen from putting Amanda against McCrae, but Amanda’s main goal is getting Helen out next week.

7:20pm – A new alliance is born.  We’ll just call it MAAA for now.  It consists of Amanda, Aaryn, Andy and McCrae.  I can also add the C to it for a MAAC, and change it to Big Mac!   Hmm, lame alliance name but I don’t care. Anyway, the plan is for Jessie to leave this week and Helen next week.

8:45pm – Jessie and Spencer are outside talking about the past few days, and the future.  They felt bad for Judd but are glad he’s gone.

I blog stuff about Big Brother
Previous Big Brother 15 – Is There Even A Point To Playing Now?
Next Big Brother 15 – Maybe We’ll Get A Big Move Next Week?
Subscribe
Login
188 Comments
Newest
Oldest Most Voted
Inline Feedbacks
View all comments