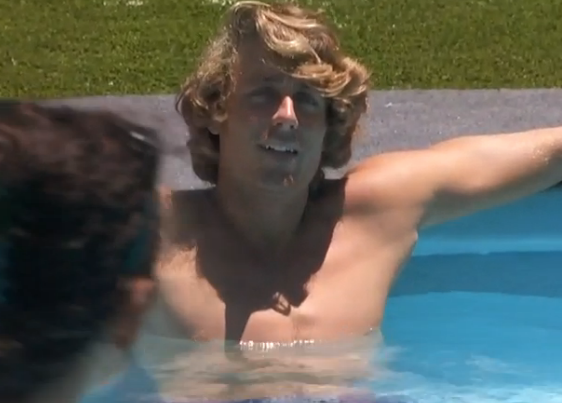 Well, well, well… it appears yesterday was not all about sitting around getting their tans on while showing off skin to one another.  As soon as the sun went down, clothes came back on, and the Big Brother 15 houseguests were suddenly back in game mode.

Catch all the late night conversation on flashback feeds

Flashback to 1:02am on camera 1 to catch Spencer suddenly get serious when talking with Andy and Helen.  He informs her about the current plan to get out Spicoli before he can do crazy things like order pizza to his classroom… oops, getting confused again.  Dave, not Spicoli… ok, so Dave is the target this week, and he will have votes against him by Spencer, Andy, Helen, Amanda, Judd, and Howard with McCrae as potential tiebreaker if needed.  Candice will be removed from the block and replaced by Elissa, this way the lovebirds of the house can think the plan to get out Elissa is going through without a hitch.

The key at this point will be securing Candice’s vote against Dave, which shouldn’t be hard when they play the ‘I saved you, you owe me’ card to her.  This should likely lead to 7 people voting out Dave which is enough to get him out.  Once he’s out, the group wants to keep Elissa in the house because they firmly believe she’s going to be MVP on a weekly basis, and they can use her as a weapon to put up one of the ‘lovebirds’ weekly.  This means that as confident as someone like Jeremy is about winning all the challenges, that means squat if you have an opponent winning MVP weekly and putting up one of  your alliance members.   As I pointed out in my previous thread, the MVP plan to remove floaters backfiring, but still making it interesting.

I believe the veto ceremony should be today, or tomorrow at the latest, but I’d bet on today.  No real waves should be created after it as long as everyone knows their role in the plan.  That said, this is Big Brother, and someone can freak out even at the thought of being a pawn which could completely screw up any well laid plans.

If you want to have a role in changing the outcome of this long-term strategy by the new alliance, you will need to get all your buddies together and all vote for a single person out of the Jeremy, Nick, Kaitlin, Aaryn group, otherwise they will get picked off one by one.  In addition to doing that, you will show the house that Elissa is not a lock every week, so they can finally start treating her like a regular houseguest instead of a weekly nomination decider.

I blog stuff about Big Brother
Previous Big Brother 15 – Anti-Floater Twist. Will It Work?
Next If Your BF/GF Go On Big Brother, You Have To Break Up First, Right?
Subscribe
Login
2 Comments
Newest
Oldest Most Voted
Inline Feedbacks
View all comments