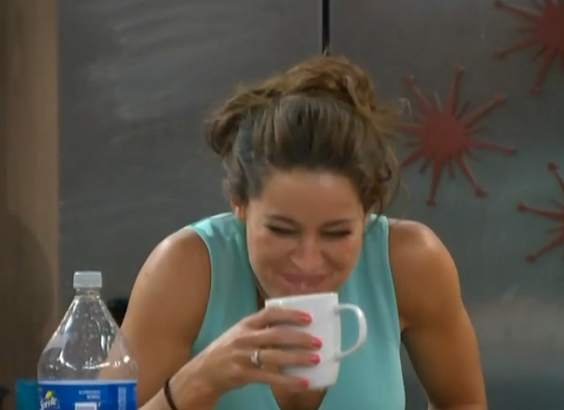 It’s the biggest day of the year so far, and we’ll be here to cover it for you.. assuming you don’t have the live feeds and are watching yourself.  The PoV competition will be held today sometime between 10am and let’s just say 1am… yes, the hour window for veto competitions almost make you wish you were waiting for the cable company.   I’m going to guess it will be at least after 12pm considering the house is still sleeping, but you never know with this game.

I’ll get right into it after my daily plugs…  (yes, I am pushing twitter/facebook hard because the season is drawing to a close and it’s the best way to get off-season updates)

10:30pm – Houseguests were sleeping, but the feeds went to trivia.  Kind of weird, but PoV possibly happening

1:30pm – Feeds finally return, and it was the PoV competition.  I am almost scared to announce who won…

1:45pm – Zingbot and baby zingbot were there, and it sounds like it was his first birthday party.  Houseguests received little toys and party favors.   Back to the game, Elissa may renom Andy to help ensure Aaryn goes home.  Amanda is already telling Aaryn she is staying even if that happens.  (On a fan note, it would be hilarious to see Helen and Andy go back to back when they both had many opportunities to get Amanda out.  That’s reality show karma and it probably will happen)

4:00pm – Just got home from a ‘quick’ shopping trip.  I have company tonight, but I will keep checking on the feeds to give you updates.  Spencer and McCrae are outside chatting, and Andy is in full blown panic mode.  McCrae and Spencer say there is no way Andy is going home, while Amanda is telling Aaryn is safe.  We’ll see who really  wears the pants in that relationship (hint: it’s Amanda)

4:20pm – Andy, Spencer and McCrae are talking about how Elissa will probably get Pandora’s Box and it will likely favor her.  Andy – ‘The game favors her every step of the way’.

7:30pm – Had some company (hey, a blogger needs a life too – sometimes). Going to eat and then do some blogging so keep checking back for night time updates

8:00pm – Judd, Elissa and Andy are up in the HoH chatting. Andy looks miserable, but he had to expect to go on the block at some point.  Elissa then pulls him aside and tells him he’s not going up, but still wants him to campaign against Aaryn this week

8:10pm – Elissa said that Aaryn is ready to start a fight with her.  Elissa went into the room and Aaryn apparently said ‘what are you looking at?’ .. things should get heated this week!

8:13pm – Judd talking to GM.  GM said ‘I think Aaryn is actually more with Amanda and McCrae than she is with me’….. things are not looking good for the poor minority blonde with blue eyes (yes, she calls herself a minority because of that).

8:20pm – Amanda is outside saying how pissed McCrae is right now.  The two are having a conflict on who to keep in the house this week… Aaryn or Andy.

The girls are now bitching about Elissa and how bad they want her gone.. well, I think GM is going along with it but has a little side thing going with Elissa.  Strange house tonight

8:30pm  – Aaryn has joined the Elissa bash session.  I don’t know what to make of it all.. I know Amanda and Aaryn hate Elissa, but I can’t put my finger on GM

8:39pm – Elissa comes outside and pulls GM away from Amanda.  She mentions something ‘I want to ask her … I wonder what it’s like to find out you’re pregnant in the Big Brother casting process’  (cut to fish) ….  (update: Found out she was talking about Amanda.  It was a low blow about a miscarriage Amanda had prior to the show)

8:42pm  – Amanda and Elissa are starting to have a little argument as Amanda forces herself into the Elissa/GM conversation. Amanda keeps joking how she appreciates Elissa throwing the veto to her today.  Apparently Elissa was saying people threw the competition to Amanda this afternoon.

9:00pm – Andy is in the HoH room chatting with Elissa about her plans for the renom.  He is in full blown panic mode, everyone else is tense, there are a lot of whispers.  This week should be really fun to watch.

Andy is promising to Elissa that he would vote Aaryn out, so if he’s nominated, she’s losing a vote against her.

9:13pm – Feeds appear to be having technical difficulties

9:18pm – Andy and Spencer say they’re only going to talk in public together about  movies and stuff.  Try to avoid strategy

9:30pm – Amanda, Aaryn, GM, Spencer and McCrae are outside eating.  Amanda has calmed down a bit, but she is really worked up about Elissa mentioning the pregnancy thing.

9:50pm – Andy is outside talking about pissed he is that McCrae and Amanda may vote him out if he’s up.  Judd is saying his friends are going to give him crap for sticking with Amanda so long.

10:45pm – Andy, Spencer, Judd and Elissa are now in the cockpit doing a bash session of McCrae and Amanda.   It’s incredible how bad people talk about each other when in other rooms