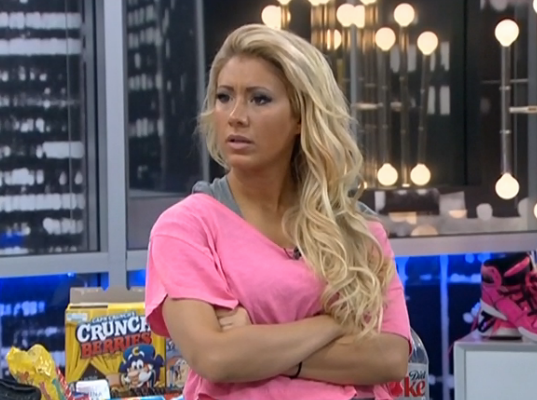 Not much really happened last night after I wrote my Hurricane Amanda thread, so I skipped the morning recap and now just doing the Saturday Updates thread.   The house is already up and players have been picked for the veto competition:

GinaMarie, Amanda, McCrae, Elissa, Spencer, Andy will be playing for the veto competition today, but this is another challenge that means very little.  The house would be fine with Amanda or McCrae going home, so regardless who wins, they’ll get their way.  The only way anything could change is if they somehow convince GinaMarie to put Elissa on the block if one of them is removed.   I don’t see that happening at all, so this competition isn’t really too important.

With that said, I wonder if GinaMarie realizes she’s the Britney from BB12’s ‘Brigade’?   Sure, Britney is prettier, funnier and had a much better personality, but 1 girl / 3 guy alliances don’t really seem to go very well for the girl in it.  GinaMarie is doing one hell of a job playing for 4th place, but to her credit, that’s about 10 places higher than I expected her to finish.  Just don’t expect to see her back in future seasons as a coach, that’s for sure.

10:20am – The Exterminators are up in the HoH discussing plans for the PoV competition today.  GM still has a bum foot so they don’t expect much from her, but they’re still working out an order to drop from the competition based on Amanda and McCrae.

PS – Spencer and Judd are out of their chicken suits.  Am I missing something?  It hasn’t been 48 hours yet… isn’t that what Julie said the other night?

10:35am – The crew talking about how dirty Amanda and McCrae have been this year.

12:00pm – Feeds are down for the veto competition.  I am trying to unclog my tub so I may be a little late when they return.  Hope not 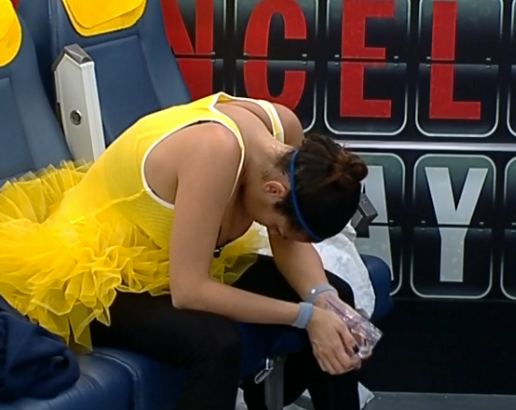 2:05pm – Feeds are back, Amanda does not look very happy.

2:12pm – Sounds like it was a knockout type of competition because Amanda said ‘I don’t know why Andy kept picking me’.  It sounds like Andy had to show his cards during the competition, so now they’re going to realize he’s flipped.

It sounds like Spencer will be going up as a pawn because GM refuses to put up Elissa.

2:30pm – Andy is going to explain why he kept picking Amanda during the competition. He said he just didn’t know what to do, he was scared, blah blah.  If they believe him after watching what he did to Helen, they deserve to go home.

3:00pm – Andy, Judd, Elissa and GinaMarie are all chatting.  I can’t quite tell if Elissa is drunk or not

(keep checking back for updates)