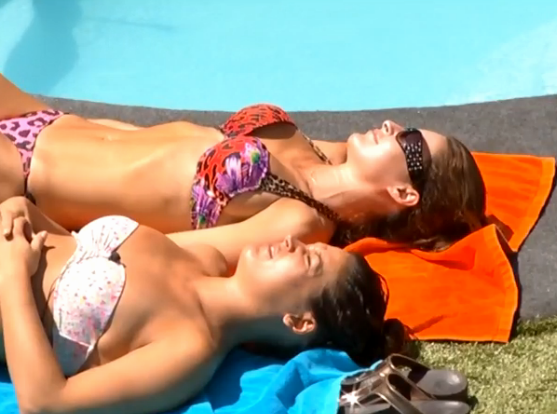 Big Brother 15 – Just When You Thought The House Was Boring

Jessie has apparently hit the ‘depression’ part of her week, as she’s sitting by the pool looking absolutely miserable knowing she’s heading to jury this Thursday.  That’s bad for Jessie, but good for me because it gives me some time to recap the past day in a format that doesn’t look like I’m transcribing the Whitey Bulger trial.

Here is what went down… Throughout the day yesterday, Jessie started getting a bit paranoid at the way Helen and Elissa have been treating her since nominations.  She wasn’t making this up as the house has clearly been a bit more friendly and social to Spencer this week, and that would get anyone on the block nervous.  I’m going to be repeating some stuff I said in the past two posts, but hopefully it will all come together here.

The action started at 10:53pm and didn’t really stop until… well, it will probably keep going on and off until eviction on Thursday night.  Last night, Jessie pulled Helen into the backyard to confront her on some lingering issues, and this started a war of words between the two.  You can read this thread for specific times, but to summarize, Jessie was really upset that Helen decided to just throw her under the bus.  In front of Aaryn, Helen made it a point to mention how Jessie wanted to get Amanda out last week, but this pissed off Jessie because she’s on the block – and Helen was into the idea as well.

Throughout the evening, Jessie basically wanted Helen to admit she was in on the plan to try and get Amanda out as they entertained the idea last week before realizing they didn’t have the numbers. The reality is, they likely did have the numbers, but Helen was too scared to pull the trigger so she backed off which set Jessie up to take the eventual fall for this plan.  When you’re on the hot seat, the last thing you want is for a major player to think you were trying to get them out the previous week.

An evening of arguments ensued, mostly with Helen and Jessie, but some with Jessie and Elissa scattered in, and one even with Aaryn and GinaMarie. Of course, you also have the strange argument of Amanda and McCrae when she got all worked up and controlling after he tried talking to Jessie alone.  Amanda got super pissy at McCrae and basically scolded him all night, throughout the entire time I am sure he was counting down the days until they no longer have to see each other.  Either that, or he was picturing what his future will be like should he actually end up marrying this girl.

The other strange moment was the GinaMarie/Aaryn tiff which started off as GM trying to keep Aaryn relaxed. Flashback to 2:53am to see Aaryn worked up that Jessie brought her name into the arguments, so GM basically told her to relax, she’ll be gone Thursday.  Aaryn was not a fan of this reaction and started snapping at GM, and this didn’t sit well with the firecracker named GinaMarie.   To ‘clear the air’, GinaMarie started going a little crazy by trying to call a house meeting at around 3am.  Jessie got a little boner about the trouble she caused and was the first one in the meeting.  Definitely worth a flashback.

It took me a few hours to cover all that in my second previous post, and just as I finished, I hit the ‘live’ button on the feeds to see that Jessie was arguing with Aaryn in the backyard today!  A bloggers job is never done…

Flashback to 1:25pm (8/13) and watch Jessie get fired up again at the house.  This time she takes it out on Aaryn and Elissa the most, which was slightly entertaining, funny, yet also embarrassing and cringeworthy.

Jessie started it by trying to expose Elissa to Aaryn letting her know that Elissa still thinks pretty poorly of Aaryn, Kaitlin and company.  Aaryn told her to shut up and the two went back and forth exchanging quite a few jabs.  I quoted a bunch in my previous thread and on twitter but the best lines came from Aaryn herself.  Aaryn basically feels like Jessie is making an idiot out of herself (which she kind of was), but also bragged about her work outside of the house doing commercials, etc.  Little does Aaryn know how disliked she is outside the house, so I guess it was only funny to live feeders.

When Elissa joined the area, Jessie directed the rage at her by calling her ‘Rachel’s shadow’ and asking things like who got their boob job first, and how does it feel to be half the player her sister was.  McCrae and Spencer summed it up later by saying the insults were kind of weak – and they were – but this is the best we’ve had in awhile, so I’ll take it.

Things started getting a little uncomfortable when Jessie sat on the backyard couch and kept repeating ‘Hi Rachel’s shadow’ and calling Aaryn an Oompa Loompa and Barney (because she was in a purple bikini).   First off, GinaMarie is the Oompa Loompa, and secondly, why not go for the low blows?  Aaryn has been a mega bitch this season, and said racist comments. The best you can come up with is Barney?  Seriously?  To be fair, at one point Jessie did mention Aaryn’s permanent scowl, but that was about as deep as it got.  It was still fun to watch, if you like uncomfortable things.

What does this all mean?  Let’s see… If this is a strategy on Jessie’s part to put a target on her back bigger than Spencer’s, it’s not going to work.  That strategy has been played out a million times on reality shows, and the only times it can work is if you don’t make it obvious.  That said, even that strategy hasn’t worked in recent years as juries have become more bitter.  Evil Dick would have a tough time winning over recent Big Brother juries.

The attacks on Helen, Elissa and Aaryn are not going to get her favor with Amanda and McCrae. Even though they probably need the vote, they’re not going to trust her after she revealed how close she was with Helen and Elissa, and how they tried to flip the house on Amanda.  The only thing it accomplishes is telling Amanda what she already knows, Helen and Elissa need to go asap. I think they’d rather put their trust into Spencer at this point because Jessie seems like a person where it takes a few nice things said to her and she’s back on your side.  Helen can win her back with ease (if she wanted – she doesn’t).

If Jessie has just said f-it, I’m going out with a bang, then it just means the rest of the week is going to be entertaining.  It won’t change Thursday’s outcome, but it will sure beat watching Amanda pick earwax from McCrae’s ear.

Thumbs up to Jessie for standing up to herself this season.  Thumbs also up for saying a few things we were all thinking today.
Thumbs down to Jessie for having a meltdown but not taking full advantage of it.