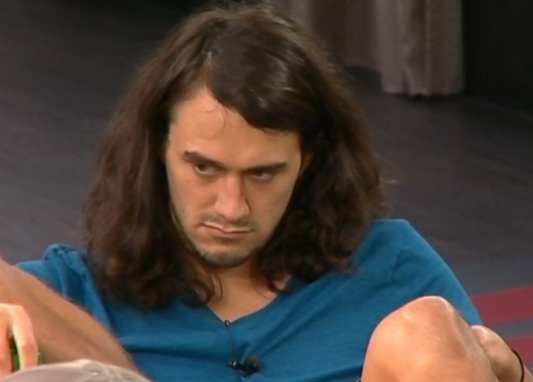 Big Brother 15 – Today Is A Huge Day For McCrae

I think this is an understatement, but if McCrae wants any shot at winning this thing, he absolutely has to win the PoV today.  While it still may be a longshot for him to win even if that happens, this will be a step in a good direction.  By winning the veto, it will force the exterminators to exterminate one of their own, and that could result in an opening for McCrae.

With that said, this is under the impression that McCrae is astute enough to recognize the four of them working together, but I don’t think that will happen. Despite having no problem slitting the throat of his longtime friend and ally (Helen), Andy is still a trustworthy person in McCrae’s eyes.  Even though Andy was doing it for their alliance, when someone is willing to do that, you have to be aware that they’ll do anything.

It’s no different than how paranoid they got as soon as they realized Howard was willing to swear on the bible while lying.  You always have to keep some doubt about a person when they’re willing to play cutthroat Big Brother.  McCrae was a fool for not instantly realizing Andy was the one who flipped on Amanda, and he’s a fool to think Andy may still have his back going forward.  I hate to bash on McCrae, but as a huge fan of the show, he made some huge newbie mistakes this season.

I will get an update out when the pov competition is over.  I’m not sure I will be doing many update threads at this point because there is literally no game talk going, and listening to GinaMarie talk all day is worse than nails on a chalkboard.  I think McCrae winning the PoV today could be the only thing that could make this interesting enough to live update all day.  We’ll see….