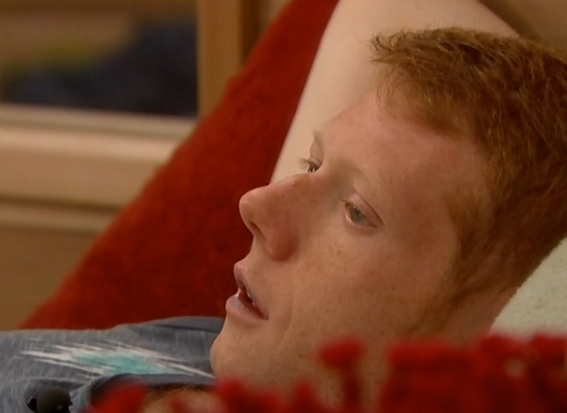 As the houseguests start waking up today, one thing is certain.  Regardless who Aaryn is around, she’ll find a person to complain about.  Complaining about Kaitlin to Jessie, Jessie to Kaitlin, Elissa to everyone, etc I am surprised it hasn’t blown up in her face.

Moments after Kaitlin wakes up from her deep sleep, Aaryn rushes to the HoH room to clean up, but in the process it was then time to do some Jessie bashing.  Jeremy calls her a typical ‘Austin girl’, and then they said she thinks about sex all day, and would definitely try to mess around with Jeremy if they were to lay in bed together.   Watching the live feeds is like a real life version of the movie Mean Girls.  It is incredible how two-faced people are to one another. 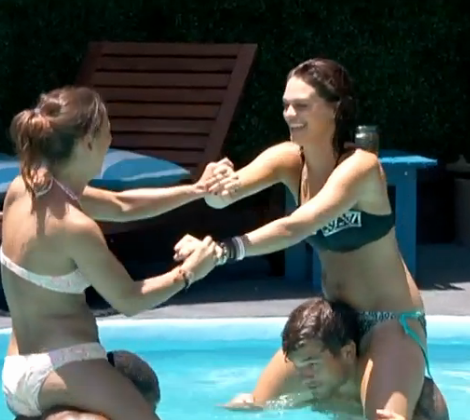 1:08pm – A little game talk happening, but some fun too.  Jessie sitting on Howard’s shoulders.  I’m sure that will give her good dreams for the rest of the summer.  Kaitlin and Jessie are doing a chicken fight in the pool, it’s good to see some fun once in awhile.

1:26pm – GM and Amanda are chatting in the bedroom, and she was rehashing some of the conversation she had with Nick last night.  Amanda and Nick then go into the cockpit to finally talk some game.  Amanda mentions how she and McCrae are the swing vote this week, so I’m going to tally up the votes early:

This means that Amanda is correct to an extent, but that’s assuming Jessie and Judd are on board.  That means Amanda isn’t really any type of swing vote right now until double J pick their side.  While Amanda is stressing and playing the swing vote card, the person they should be working on is out playing in the pool with the ‘other side’.

Basically at this point, it will take a huge shift in house dynamic to save Elissa.  With 5 strong voting out Elissa, there isn’t much wiggle room for the rest of the house.

4:20pm – Had some dinner, back to the feeds.  Jeremy is sitting around talking about various things with Nick and Judd.   He tells us that there is a school in Texas that is mostly Asian and they’re all like genius level.  He references how they’re smart because they’re Asian, because of course he couldn’t go a day without a stereotype.  Then talk of India came up and let us know that there are more Indian geniuses than there are American citizens.  (note: He is referring to India, but doing a fact check he was way off.  There are about 315 million people in the United States, and about 5 million people in India classified as genius)

4:48pm – Amanda joins Aaryn in the HoH to talk about the race issue.  She thinks Aaryn is joking about the racist remarks, but she thinks Howard, Candice and Helen are taking offense to some of the comments (you think?). Amanda is trying to play it off like it was no big deal and Aaryn was joking, but I think even Aaryn will be shocked when she watches the montage of her comments this summer.

I will be updating this throughout the day if anything exciting happens, so keep checking back!