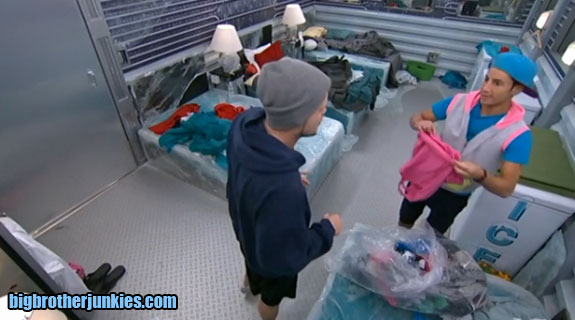 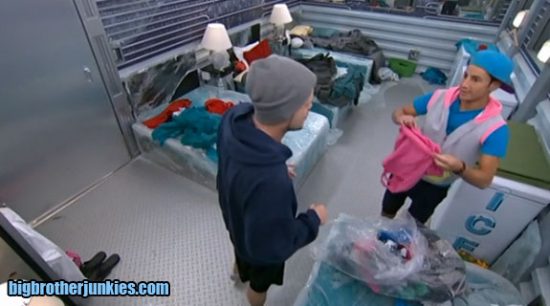 If and when Donny leaves this Thursday night, I’m done with Team America completely. I’m going to stop talking about it, stop writing about it (same thing?) and just pretend whatever Team America segments appear on TV just didn’t happen.  This week, apparently they were given a mission to do whatever they wanted, and America will vote whether or not it was worth the victory.  Donny immediately suggested a ‘Save Donny’ campaign that would have been super easy to complete and give America what they wanted.  Derrick and Frankie, they had other ideas…

Yes… a stupid play. Getting the house together to put on a play.

Look, if Donny was sitting on the block with Caleb, then I can remotely see a worry, but he’s not. He’s sitting next to a person who was given a second chance at the game and failed horribly at her chance to win HoH.  How easy is that?  I love Nicole, but just convince everyone Nicole deserves to go right back into the jury house. It’s simple, $5k each, America is happy.

However, let’s pretend Caleb was on the block with Donny. What are they scared of now?  Vote out Caleb and it’s Team America plus Victoria and Nicole versus Cody and Christine.  Derrick has Victoria so far up his butt, she tastes whatever he has for lunch, and Nicole is closer to Donny than anyone else.

Even if they voted Nicole out this week, it could still easily be Derrick, Frankie, Victoria, Donny and Caleb versus Christine and Cody.  Caleb is so fiercely loyal to the group, I have no doubt Derrick could easily talk him into siding with them for the numbers.

So, what’s the holdup?  What’s the problem?  It’s simple. Team America sucks and they’re voting out Donny while pretending their hands are tied.  If this mission happens, vote for a success simply to give Donny $5k on his way out, but I suggest all bloggers stop promoting or mentioning Team America after this.  It has been a joke all season, but this is just the icing on the cake.

Ok, rant is over.  My apologies for not being neutral here, but it is just frustrating watching them lie to the guy who America wants them to be working with… all while pretending ‘Ohh, we’re Team America… Team America baby!’.   I understand all three of them are looking out for themselves in the end, and both of them are terrified of Donny, but at least humor us this week.  Don’t perform a stupid play. Save Donny.