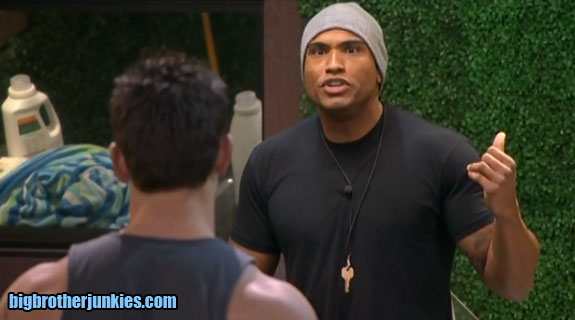 Big Brother 16 – The Bomb Squad Blows Up On The 4th 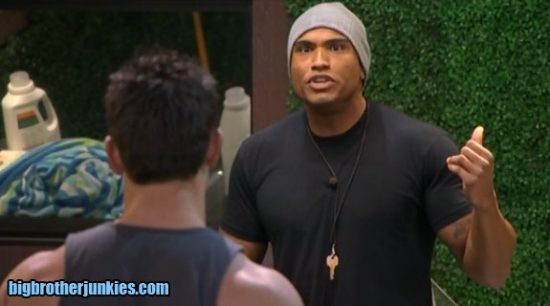 First things first, this house really needs to start their excitement earlier in the evening. 6am est is just far too late/early (depending on how you look at it) for me to keep up with live.  I may end up going to bed at like 9pm and waking up at 5am (est) to be able to live blog the good stuff.  Damn night owls.

Anyway, Devin winning HoH was probably the best thing that could have happened to me (as a blogger). Sure, it was a very uneventful first day, but later in the night, Devin went Devin on a few people and next thing I know, the ‘Bomb Squad’ is done. I think?   I’ll give you some timestamps if you want to use the flashback feature with the live feeds (if you don’t have the live feeds, sign up free!)

1:38am – Devin pulls Christine into the HoH room to pick her brain on some issues.  Where Jocasta stands, how he made Paola throw the competition, Caleb and Amber, etc, etc. Not much of a conversation, but the real issue comes when the talk is over and Christine is released back into the wilderness.

2:30am – Derrick and Caleb are chatting with Amber and Christine about how Devin talks to people.  How the girls are intimidated by him, Devin is a loose cannon, he’s going to reveal everything to the house if he’s ever backdoored.  Typical stuff you’d expect to hear when people speak about a bully. (the funny thing is that Caleb is quite the bully himself, but not nearly as bad as Devin)

3:10am – The Amber talk has been broken up for a bit and Caleb/Derrick are playing pool when Devin comes out to chat with them. Caleb immediately calls him on the way he talks to girls, which naturally makes Devin flip out and get super defensive. They pull Christine into the conversation to confront her, and Devin makes her confirm their conversation was pretty innocent and she was just worried about what he had to say (and not the actual conversation itself). However, being the observant police officer, Derrick notices Christine looking down and playing with her zipper through the whole conversation (a sign of nerves), so he wasn’t buying it.

With Devin feeling victorious, he leaves and lets the two resume playing pool.  However, like any aggressive person (*cough* roid raid), Devin comes back out to finish the conversation with Caleb.  At 3:17am he pulls Caleb aside for a pretty brief yet heated discussion on how he’s done and the alliance is over.

The rest of the night, people try to piece together what happened, and how the alliance will go moving forward, but one thing is for certain, the feeds should certainly be a lot more entertaining this weekend than they were throughout the day yesterday!

The house is on lockdown while they set up the PoV competition.  I will be back on later to live blog the house.  Need to do some grocery shopping first.  Check back soon!