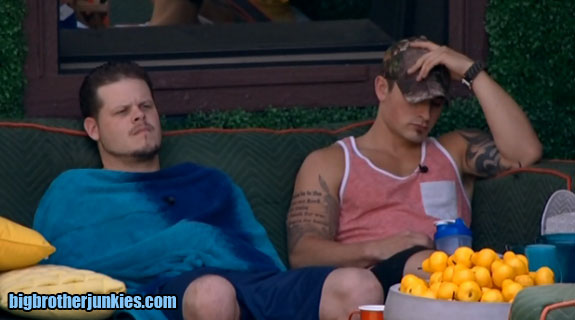 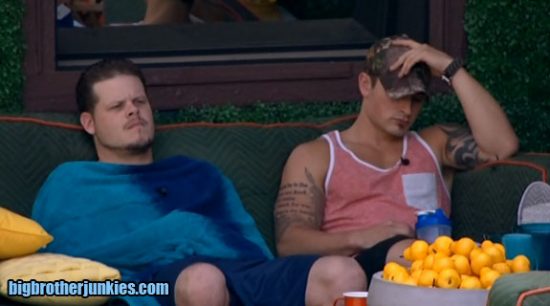 Well, that didn’t go as expected….

On Sunday night, Caleb was pretty much over the moon with the plan hatched up by the house to nominate Amber after Hayden used the power of veto on Victoria.  Caleb thought this was the perfect opportunity for Amber to realize just what a knight in shining armor Caleb has been to her this whole game.  His plan was to basically tell her he’s been the one protecting her, and he’s going to do it once again this week by not letting her become evicted from the house.

It’s the classic romantic move. Like when you’re standing at the edge of a cliff and you push your girlfriend over the side and then help her back up before she plummets to her death. The girl will always remember what a hero you were that day for saving her life!  Oh wait, she’ll actually remember what a psycho you are, but I think someone forgot to tell Caleb that part of the story.

When the feeds returned from the veto meeting, Amber was working on getting votes, finding out what happened and trying to piece together the last 30 minutes. Meanwhile, Caleb sat up in the HoH room letting her scramble for her Big Brother life and refused to go talk to her until she spoke with him first. Finally, after about an hour or so, the two finally got together in the beehive room and that’s when Caleb fell apart.  His plan failed, Amber didn’t appear grateful by his gesture of putting her on the block and Caleb fell back into the Amber trap. Until Frankie showed up…

After kicking Amber out of the room (2:55pm), Frankie immediately lays into Caleb about falling back into the Amber trap. He reminds her that Amber only went on the date with him because she felt bad for saying no. Amber doesn’t like him as much as he loves her, she wants to form an alliance to get  the guys out, he is ruining his game for her, etc. Caleb, still in denial, called Nicole into the room and drilled her for answers. “What did Amber say to her outside”, “What did Amber say to her after the date”. Nicole answered as honestly as she could (that Amber indeed wants to join with the girls, and also felt bad for Caleb during the date). Caleb let Nicole go and sat there stunned for a long, long time.

He went outside and sat next to Derrick (pictured above) and put his head down while the DR kept calling him to go in.  After Frankie finally encouraged to enter the DR, the retells began to pretty much the entire house. Everyone quickly learned what happened and what the plan is for Thursday – vote out Amber.

The rest of the night, the core group of people (the detonators) were trying to decide if they should keep Caleb in the dark and pretend Amber is safe, or let him know in advance. As of right now, they’re going to keep him and her in the dark, but I doubt that will last very long in this house.

Before I forget, one thing that is going to grow extremely annoying this week is the tragedy Amber is letting everyone know about while not telling them what it is.  Amber is vaguebooking the house (see: below) with her story that she refuses to tell while constantly talking about said story.  She won’t go into detail about it because she doesn’t want to gain sympathy (and who knows, it could be a really sad story), but by mentioning you have a sad story and not telling the story is kind of a fail strategy. Many people will think she does have a sad story, but it’s not sad enough to actually gain sympathy, so she’ll pretend it’s worse than it is.

At this point, Amber may as well tell people what her story is so I can stop being curious!  Yes, I am just being selfish, I want to know what it is.

(vaguebooking is a term used on facebook when people post status updates on how hurt they are, or how bad they were screwed over, but refuse to go into details.)

I’m sure the house will have plenty of interesting events over the next few days, so stay tuned for updates! Finally the house is alive, and let’s hope it stays that way longer than a day.