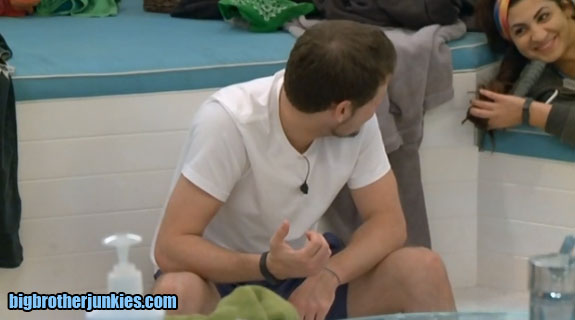 Big Brother 16 – Do Crazy People Realize It When They Act Crazy? 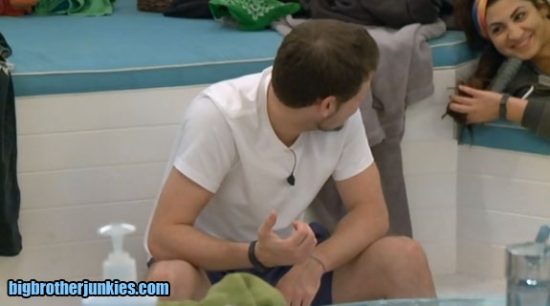 This is a question that I’ve been wondering for some time now. When GinaMarie freaks out about some guy she knew for a month who didn’t show any interest in her. When Caleb thinks he and Amber are going to get married the second they leave the house, or now when Victoria acts like an obsessed teenage girl over a married man.

Last night around 2:30am, you can pop in and listen to one of the more uncomfortable conversations people have had since Caleb’s soon-to-be wife was evicted. Victoria gets Derrick in the bathroom and confronts him on hanging out with Christine more lately and tells him she’s jealous about it. She also admitted to hanging around with Cody more to try and make him jealous.  What the hell am I watching?

At what point do people realize they’re already in over their head with the crazy scale, so they may as well go all-in and hope for the best?  I think we’re watching Victoria reach that point and it’s downright creepy.  I’m sure she’s a nice girl, and I’m sure living with the same people for 2 months straight with no outside communication can mess with your head, but when exactly do you just decide to go full 14 years old on everyone?

In other overnight house news, the talk of the house was still Donny being the main target. I understand Donny will win if he’s in the final 2, there is no doubt about that. I understand he gets a little beast mode in him when his BB life is on the line. However, it’s mind boggling to see the entire house with pitch forks yelling Donny’s name while Derrick is controlling them all like puppets.  I think Derrick has played a hell of a game and deserves to win should he make it to the final 2, but just wow, it’s shocking how blind the rest of the house is.

And finally to wrap up the overnight report, Zach has appeared to have accepted his fate.  Although he basically accepted it days ago, but the house worried he was going to have a Zach-like meltdown and destroy stuff. Instead, he merely prepared for what he’ll be wearing when he’s evicted and is fully prepared to be called tonight.

It’s going to be a fun night in the BB house with the returning player hopefully stirring up some trouble.. unless Derrick quickly puts out the fire and that person is eliminated the first opportunity they get (they will likely get a week immunity).  The way this season has gone, I am expected the latter but hoping the former.

Who do you want to see re-enter the house tonight?  Jocasta, Hayden, Nicole or Zach?