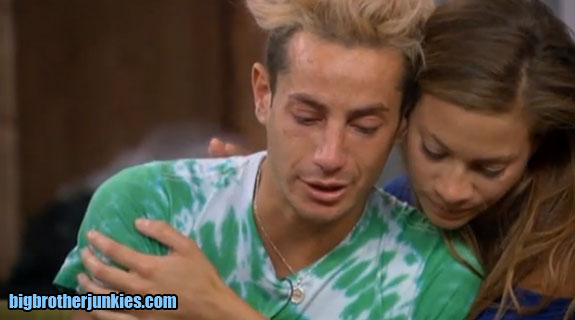 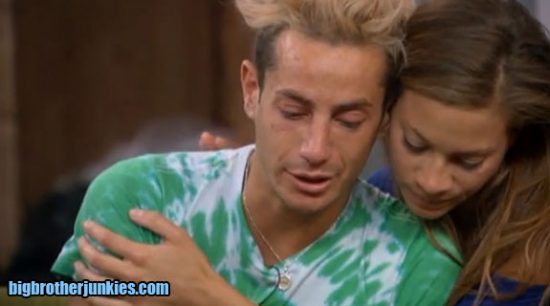 Last night around 4:30pm, the feeds cut for much longer than usual. Frankie’s grandfather had passed away, and it was announced by his sister on Twitter. Many were wondering if the house was going to tell him, but when the feeds cut for so long on a non competition night, I knew the answer.

Sure enough, when they returned around 5:00pm, Frankie was in the living room sharing the news to the fellow houseguests. Clearly very close with his grandfather, Frankie took the news incredibly tough, and it was emotional to watch (who was cutting onions?). Frankie said he will remain in the game and try to win for his grandfather, but the bigger question remains.. will he be able to leave for funeral? Typically in shows like this, the players can’t leave the house for fear of secrets being exposed by outside viewers. That said, they have had players leave under supervised gifts, like movie premieres, or even Shane meeting the gymnastic team.  If the funeral is in the LA area, I am hoping they will allow him to leave for a few hours and just be tightly watched.

In other news, nothing has changed on the Brittany front. Her strange week of campaigning that she’s not a threat while bragging about how determined she was to finish the soccer punishment didn’t work.  She will be heading home barring a complete miracle today.

I don’t expect much to happen on the feeds today, but if it does, I will be on top of it.  Eviction prediction thread later, and live feed thread after.  Have a good Thursday!