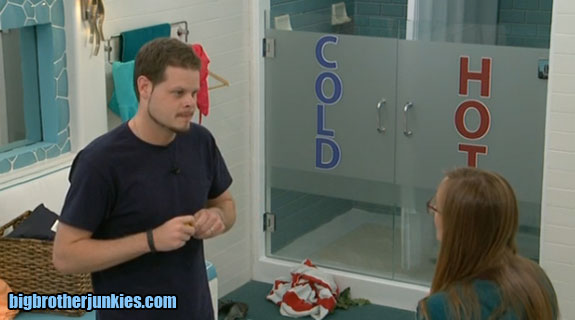 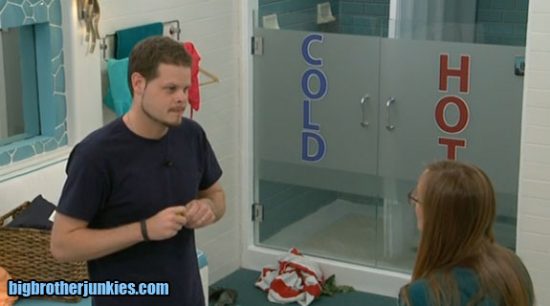 Last night after watching the veto episode and blogging the recap, I was certain Zach was screwed. Christine had it out for him and the detonators were going to blow up this eviction. A new happy, friendly alliance formed with a terrible name (‘the rationale’, really?) and the little country girl was going to take some power after being screwed over by her friend all season.

Then I turned on the feeds. (and you can watch them too, for free!)

The house had their midway party around 6pm, and alcohol was indeed served. This was the perfect time to get the house lubed up because they all had a feeling this is going to be a pretty big eviction week.  It had to be.  There has been nothing all season, and we’ve been long overdue for an endurance or double eviction. Additionally, lines were going to be drawn in the sand and Derrick/Cody had to finally commit to an alliance once and for all.

All it took was Caleb questioning their decision again to evict one of their numbers (which still made zero sense to Caleb, Christine and Frankie but they were doing it anyway). This little seed quickly sprouted into a full grown tree within an hour or so, and Derrick realized he had a solid thing going with his former alliance.  Sure, they were more douchy and much more untrustworthy, but they’ve been with him and Cody since the beginning and turning on them now (as we head into jury) is bad if and when they’re sitting on the final 2 chairs.

Jury members have been known to be more bitter than respectful of a good game, so managing the jury is almost as important as getting to the final 2. That said, the damage has already been done for Derrick and Cody by forming an alliance with Nicole and Hayden and then breaking it a few days later. At least by voting Zach out, they had the approval of the detonators, but voting out Jocasta should spin some heads.  Will it be a good move?  I guess we’ll only really find out at the end of the season, but tonight is easily going to be the biggest night of the season to date.

Once the wheels were spinning in Derrick’s head, he chatted with Cody about it who also got a bit worked up.  When Derrick was called to the diary room, Cody instantly ran to Nicole and confronted her on all the rumors he’s been hearing this week about him and Derrick being targets. Christine told him they were indeed targets and to screw off – just kidding.. Christine denied it and Cody believed it. By the time Derrick got out of the diary room, Cody, Christine and Frankie were all buddy buddy again, and operation Keep Zach was in full swing. All they had to do was tell Caleb and it would be on.

Did I fail to mention how Cody thinks Donny is a super genius and the mastermind behind getting Derrick and Cody to flip on their alliance?  You would think if Donny did that, he would have something to gain, like being in the ‘Rationale’ alliance with them.  I guess Donny is just 5 moves ahead of everyone else and had that figured out somehow (sarcasm intended).

So, after the first eviction tonight, the HoH competition is going to look like this…

Caleb, Christine, Cody, Derrick, Zach, and Frankie all playing for one goal with Hayden, Donny and Victoria all playing to stay alive. Considering Victoria is pretty much a floater and doesn’t really have a side, the competition will be 6 versus 2.  Not very good odds for Hayden and Donny.

I am likely going to open a live feed thread a little later because I have a feeling there will be some last minute talking, and maybe some drama before the show. Typically I take Thursday afternoons off, but this week may be worth sticking around for.