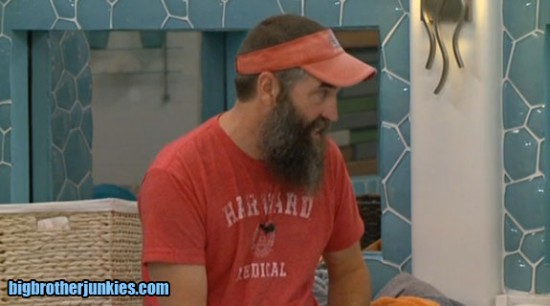 “Caleb calls himself a hopeless romantic, but his relationship with Amber is just hopeless”. Those were the words Julie Chen used to open the live eviction show, and it was clearly foreshadowing what was in store for us that episode.

As per usual, the first 15 minutes of the live show had highlights of the week from the veto meeting until Thursday morning. The veto meeting takes place on Monday, so there is generally good stuff to air that happens between that point and the live show, and this week was no different.

This week highlighted the jedi mind tricks the ‘detonators’ used to Caleb to not only convince him it was his idea to put Amber up, but to also vote for her to be evicted. I seriously thought Frankie was just going to wave his hand and say “Amber is not the girl you are looking for” and Caleb would forget all about her. I still think he has those jedi powers, but he’s likely saving them for a later time this season.

Team America was given the mission to get two people to vote against the house and blame it on other people. This was  a very easy mission as Donny and Derrick simply had to vote for Jocasta. The problem would have been dealing with the aftermath of it. It was an easy $5k for them, but this could have seriously jeopardized their game. Donny, being the kind person he is, apologized for not voting against the house during his brief voting window.  He wanted to do America’s bidding, but he also wants a real chance to win the game.

To the surprise of nobody, the eviction was another unanimous vote – the fourth this season (out of five evictions).  The last time the house was this united was Big Brother 12, which coincidentally is the season of ‘The Brigade’. The mostly all-male alliance that dominated the house before kicking out their female ally near the end (Brittany bb12, Christine bb16?). In that season, only 3 votes were cast against the house all year. 2 of those votes happened in week 2, just like Big Brother 16.  Are we going to see a repeat of BB12?

Once Amber was out of the house and laughed with Julie about Caleb’s obsession with her, it was time to compete for the Head of Household.  The houseguests were given a clear study guide this week when the memory wall displayed loops of highlights from competitions this season. Anyone who is even a casual Big Brother fan knew this was to prep for the HoH competition, so the house studied it, and it showed.

After a shocking 12 rounds, Julie had to pause the competition because the live show ran out of time.  This is the first time I can remember a simple trivia style competition running beyond the allotted live show time.  The endurance and mini-endurance challenges are normal, but never a trivia competition.  When the competition was paused, five people were still alive.. Hayden, Nicole, Caleb, Zach and Donny. Cody was the only person eliminated after round 6 until the competition stopped.  It was quite intense for trivia.

I am sure many of you are wondering who won the competition, and considering it was clearly not meant to run past the scheduled time, I will spoil it for you.  Donny and Nicole emerged victorious.

To see more of my recaps, visit OK Magazine.  To get Big Brother spoilers, stay around this site and come back daily!