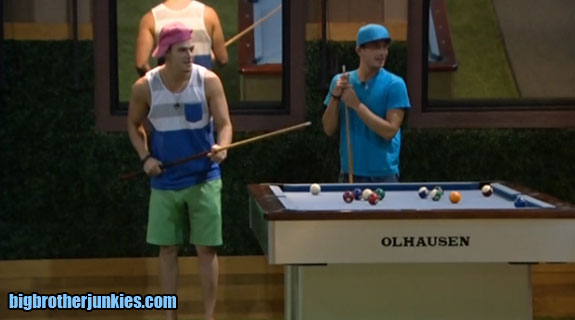 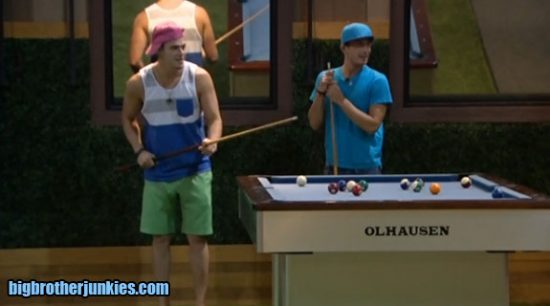 Zach being evicted this Thursday is already signed and sealed, and now we’re just waiting for it to be delivered from Julie’s mouth.  Zach knew it immediately after Caleb won the power of veto but tried to prevent himself from going on the block. Much like Nicole last week, there is/was little chance for them to be safe after the veto meeting. Avoiding the chair would have been their only safety, and both failed at that.

However, Zach can take solace in the fact that at least he’s well liked on the outside, and received some proof of that last night.  If you flashback to 10:19pm, Zach Frankie and Caleb are outside talking about how much Hayden is slamming Nicole this week (yes, this is what you get with mostly guys in the house) Caleb hears some yelling and we are able to pick up “Zach we love you, Frankie you’re disgusting” before Zach runs around the yard yelling back at them that he loves them too. It’s kind of nice to see Zach finally receive some support, even though it’s from people on the outside. Inside the house it’s a different story..

Around midnight, Victoria decided to go on a Hate Zach rampage and rage about him non stop before stealing his hat. She was given a knife, and the feeds went down for a few minutes.  I don’t know if she actually destroyed his hat, or hid it, but he couldn’t find it for the rest of the night. Zach searched for it, but had no luck.  This bullying of him will only be more fuel for the fire when Julie lets everyone know Zach will join Hayden and Nicole for a chance to re-enter the house (Jocasta too since I’m obligated to pretend she’ll compete).

I will be creating a live feed thread shortly, but right now it’s just Cody and Donny on the couch outside. Cody is retelling the Victoria/Zach hat situation.