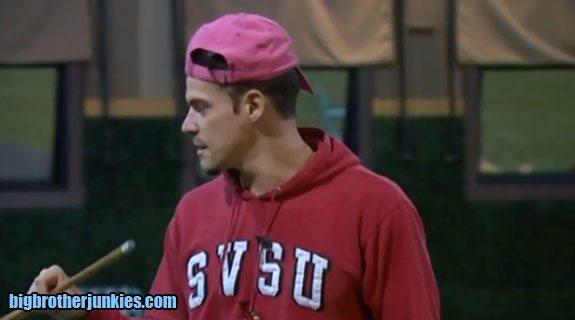 Big Brother 16 – Is Frankie An Evil Genius With #RenomRule? 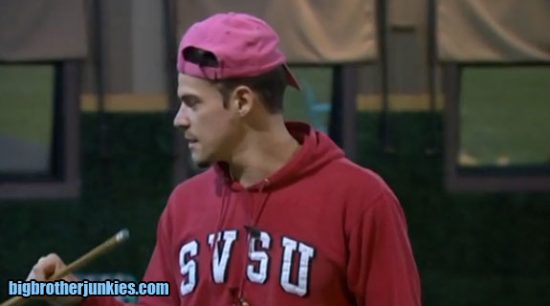 Last night was clearly the Zach Show on the Big Brother live feeds. Around 6:25pm, the house started to discover they had items missing thanks to the Team America challenge this week. Naturally, they pointed their fingers at the one person who could possibly be behind it – Zach Attack! They accused him of being the saboteur this season, and actually made a pretty good case. So good in fact, I wonder if Frankie and Derrick are beginning to question whether or not Zach had his own little side missions going on.

Zach didn’t help matters when he decided to go along with it and steal the cue ball in front of Caleb. Just like the Amanda’s cousin rumor, Zach decided to play into it for whatever reason and the house was completely convinced they caught the saboteur. Later in the night, Caleb sat Zach down and had a long talk with him about how bad  it looks, and he surprisingly made a lot of good points. Of course we know the truth behind some of them, but things like describing the necklace that Victoria had go missing was weird.

Regardless of how bad Zach made himself look, it was a hilarious few hours that will make for a great show on Wednesday night. I tried my best to recap events as they were happening and you can read that here, but the best way is just to watch it.

Another big topic began after I went to bed. That was the trending of the word #renomrule. This is due to Zach approaching Frankie at the end of his conversation with Caleb and confronting him about this week.  This late in the season, it’s fairly easy for people to pick up on when they’re in trouble.  People start looking at you different, talking to you different, avoiding eye contact, etc. Zach has noticed that and has been worried about being the potential renomination at the veto ceremony today.

Well, Frankie decided to straight up tell Zach he was indeed going to be the replacement nominee and will likely be leaving this Thursday, and that set off a firestorm on social media even involving Frankie’s sister (whoever that is – just kidding). Telling someone they’re going on the block is against the rules, though it has been lightly enforced over the years. Big Brother Network did some digging and found the last time it was enforced was BB12. However, with #renomrule trending and Zach already suspected as the saboteur who gets special treatment, now may be the perfect time – if any – to enforce that rule.  It would certainly help spice up the season and keep a very entertaining figure around for at least another week.

Note – Ariana tweeted that Frankie knows the rules and suspects Frankie knows what he is doing by saving Zach. I disagree. Also, I am adding this as a note because I am too lazy to work it into my paragraph above

Will it actually be enforced? That’s unlikely, but we will find out in just a few hours when the PoV meeting takes place.  I will start a new thread talking about that, so stick around!  Hopefully it helps get you through your Monday!