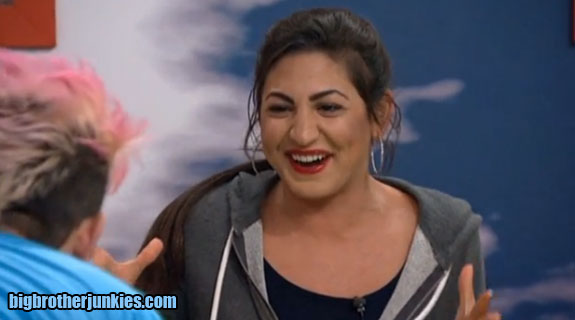 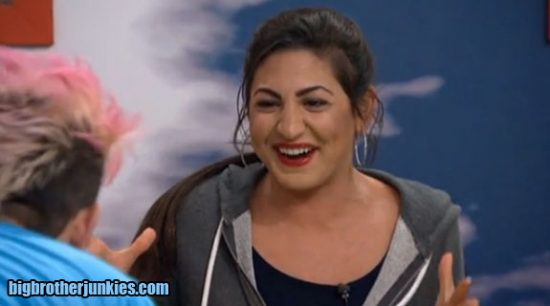 I am going to say, yesterday took a pretty unexpected turn and I’m still trying to digest it. Thursday night, Caleb found out that Frankie was one of the people who manipulated Nicole into exaggerating how much Amber wanted Caleb out.  This set him off because nobody gets between a stalker and his victim… I mean Beastmode Cowboy and his girl. As a way to get back at Frankie, Caleb told Nicole to nominate them together so Caleb can sit down and tell Frankie to complete the BotB by himself.  Nominations came and went, and Caleb’s plan was well underway. The two were paired together, and he (Caleb) let the DR know he was going to sit out and they appeared fine with it (later Caleb would admit there is a rule they have to play in comps, so he was surprised they let him do it).

The day went on as normal, and feeds eventually went down for the competition.  At 9:55pm, the feeds return and the house was all fired up.  Zach and Frankie were screaming at each other. Frankie was rubbing it to Zach that he won the competition alone and he’s not going anywhere (Frankie did apologize to Donny for that because Donny is still on the block). The two sat in the living room screaming at each other like they’ve been married for years, but Frankie kept dropping hints he had to say something that could change everything. Zach demanded he be in on the meeting, and after some hesitation, Frankie pulled the guys (minus Donny) into the fire room for his reveal.

I covered a lot of what was said (as best I could, I’m no transcriber), but now I can summarize here. You can flashback to 10:02pm to see the entire reveal.

Frankie revealed he’s not who he said he was.  He was indeed on Broadway, but that was many years ago. He is now a social media star with over 1.5m followers through all his platforms combined. He has a Youtube channel, Keek, Tweet, Kit, Kat, and whatever else there is. That wasn’t the biggest part. He also revealed his name has really been shortened from Grande Marcioni to just Grande.  Derrick comes out .. “Amanda Grande?” (close enough, Derrick).  Frankie continues with his reveal on how famous and successful and beautiful of a voice his sister Ariana Grande has (yes, the same girl with that horribly annoying voice on those two Nickelodeon shows… don’t judge, my step-daughter is a teen). To be fair, Ariana doesn’t sound like that in real life, it’s just a stupid character, but I’ve never actually heard one of her songs.

Caleb has a tough time absorbing this all. He goes from telling Frankie he would have punched him in the face if they weren’t in the house to becoming his best friend and trying to get hookups in the country music industry. I should note, Caleb said the punch in the face part because he was upset Frankie held a huge secret when everyone else admitted who they were.. Caleb especially, considering he’s a man of many, many, many talents apparently (the only thing Caleb can’t do is play Tennis – according to Caleb).

The guys were a bit shocked by this and had a difficult time absorbing it. The girls on the other hand gushed all over the fact he is related to Ariana. Victoria is a mega fan of his sister, and as you can see above, she lit up with the possibility of meeting her after the show.  Frankie remained with the girls for awhile bragging about his sister because they seemed to care a lot more than the guys did. Cody had to keep reminding the other people how Frankie is not the famous one, his sister is. Zach was worried about America’s Favorite  (but I actually believe that will go to Donny despite Frankie’s fame. They compared Elissa’s win, but Elissa was up against a cast full of horrible people. Donny would have beat Elissa as well).

When the dust settled, Zach and Derrick felt pretty demoralized. They feel Frankie is a guaranteed winner, especially considering he said the prize money would go to a charity. Later in the night, Nicole even said she’d have a hard time getting him out because of his fame, but again Cody reminded her Frankie is not the famous one. This cast is too scarred by Elissa’s massive popularity, but they don’t realize Frankie doesn’t really have the same thing going. While popular, I have not seen a large amount of people caring if he were voted out.  Donny on the other hand… be careful there. I said earlier in the season and I’ll say it again.  Voting Donny out would be like voting out Santa Claus.  The longer the season goes on, and the more Donny remains true to himself, the harder it will be to vote him out and not be hated by BB fans (if that’s what they care about).

Do you think Frankie’s reveal will help him, hurt him or have no impact on his game going forward?  He’s safe for the week, but he’s still a very large target by the guys. Will they be too scared to vote him out now?

Veto competition is later on today and it’s a pretty big one. If Donny wins, it will be a very interesting two days on the feeds until the meeting on Monday.  I may go out for a bit this afternoon, but hopefully should be back before the veto competition is complete.  Have a good day!