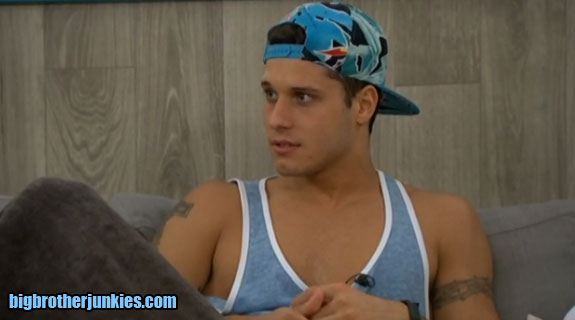 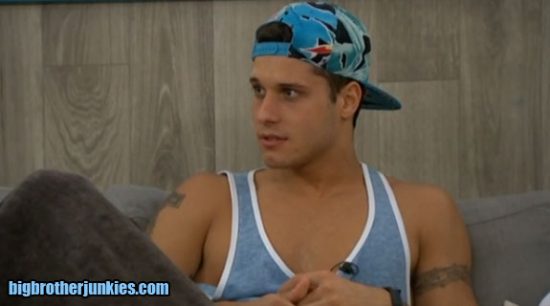 Warning, if you have a low tolerance for being annoyed, you may want to skip this article entirely.

I have a feeling this week on the feeds is going to be pure ugly, and not in a fun sort of way. Just mean and ugly, especially if last night was any indication.  Right now it’s 6 versus 2, and those two are a 42 year old groundskeeper and a 21 year old nursing student.  So naturally, being underdogs and upset about their situation, the two banded together and did nothing but talk shit about the group of six all night.  Just kidding!  It was the other way around.  The group, minus Victoria (who is never really anything) sat up in the HoH room around 2:15am and had a nice Donny bash session.  Feel free to flashback the feeds if you can stomach it, but I’ll also summarize..

Cody and Christine did a majority of the bashing, but even Derrick chimed in with some comments about how much of an outsider he is, how big of a generation gap there is and how he’d rather hang out with a bunch of cows than them (my take – He’d rather hang out with cows than douchebags, so yes). Christine chimed in how evil he is, and then they obsessed over a paper frog Donny remembered how to make.  Cody mentioned how he’d vote for Victoria in the final 2 over Donny and how he’d put him in a choke hold if they were in the jury together (sure you would buddy, sure you would).

The group stopped talking about Donny for a few minutes to then talk about how amazing they are. How they’re the best alliance in the history of the game, how they survived two loose cannons (Devin and Zach) and are still together, blah blah blah. It’s quite funny in a sad way, and it will be even better when they realize only two of them can make it to the final 2, and there is no way they’re all going to be gracious losers when the time comes.  Note to players, the ‘bomb squad’ fell apart. The only reason you still consider yourselves the ‘bomb squad’ is because you realized Caleb is loyal and he was the only one who thought that alliance existed all season long.

Ok, back to Donny.  There have only been a handful of genuinely nice people to play Big Brother, and Donny falls in that category. I hope each and every person who talked crap about Donny this season feels absolutely horrible about what they said as they re-watch the show and re-watch the diary room sessions.  Christine not only threw the competition with him, but tried to sabotage it by helping the opponent and his reaction was “I don’t like to brag, but I have to say I think I won the competition on my own”. If that was my DR session, it wouldn’t have been so polite.

Anyway, the power of veto competition is being held today. I’d like to say it’s a big one, but it’s not.  The ‘Bomb Squad’ may pretend it’s a big one, but Nicole or Donny are leaving this week regardless, and the other will likely follow next eviction.   The survivor may stretch it out one more week if they can win HoH, but they’re doomed as soon as the house gets a chance.

I have a few errands to run this afternoon, so if it’s an early PoV competition, I won’t post the results until later. Hopefully they do a night comp so I don’t miss anything.  Enjoy your Saturday!